I’m half crazy, hopeful in love with you
It won’t be a stylish marriage
I can’t afford the carriage
But you look sweet upon the street
On a bicycle built for two
We will go tandem as man and wife
Pedaling our way down the road of life
-Blur 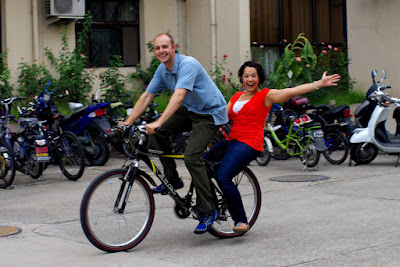 birdMAN rarely romanced me with flowers, jewelry, perfume, or anything like that. When I started attending college at a town famous for bicycles, he bought me a basic bike. We soon married, and we invested in some decent mountain bikes. We typically spent a weekend morning in nearby canyons traversing what I thought was pretty hardcore terrain.  After three years of marriage, we bought a home in a small town surrounded by farmland and flanked by a small mountain range. We then embraced road cycling, even wearing spandex clothes which emphasize every bodily flaw. We participated in several 100-mile rides. We spent a couple weeks bicycling in Yunnan and Guanxi, China for vacation.

By the time we sold our home last summer, we had accumulated three bikes each. So you might say bicycling has been a major part of our marriage. For us, the bicycle cycle has fully cycled. We are back living in a college area brimming with university students who use bikes for transportation. And we are back on our beater bikes, rolling up the right pant leg so it doesn’t get greased up in the chain.

Buying a bicycle in China is a different than buying one in the US.  First, we would spend a few months researching performance, components, frames,  etc. Second, we would set aside a lot of money for the big purchase. In China, we can’t read Chinese, we can’t speak Chinese, and we aren’t sure how long we are sticking around. So research involves asking our expat friends their opinions and set a bike budget on par with a Chinese lifestyle.

Again we relied on our friend Xialian, who has bought four bicycles during her time in China. First she asked us, “Do you want a real bike, or a fake bike?” China is full of knock-offs, and you get what you pay for. We visited several bike shops (Xialian knows all the shops). birdMAN picked up bikes, sat on bikes, and rode the bikes. By the third day here, we were so tired of standing on buses and subways that having bicycles was becoming desperate. Despite our desperation, birdMAN had some requirements before purchase. These requirements were:  fenders, brakes that work, multiple gears, well-built with a solid bottom bracket. We found several bicycles that met none of these, until we ended up in an upscale bike shop that you could mistake for being in the US (except everyone spoke Chinese).

The walls were a muted green promoting trust and warmth. The salespeople were friendly and helpful. They almost had birdMAN sold on a set of solid, genuinely brand bikes each costing about 900 RMB ($134 USD). Before you say, “That’s cheap!” Remember, we are now in China on a China budget. I balked. Can’t we get something cheaper? Ok, birdMAN agreed to try the last place on Xialian’s bike shop list. We got back on the bus and of course we stood on our tired feet for another ride.

Xialian led us to a hodge-podge street section, where all store merchandise is outside and most of it looking dusty and rusty. We passed electric scooters, other large equipment, and children playing while people yelled at us trying to lure us to their shop. I thought, “What bike shop is this? Where is she taking us?” Then we turned down an alley with garage-like structures filled with bicycles and salespeople. So we started looking at bikes. Most of them were knock-offs. It is pretty obvious when the label reads “GANT” when the real name is “GIANT”, a major bicycle brand.

We came to a garage/shop owned by a tallish smoking man. Of course he was Chinese. We were the only 老外 (lǎowài outsider) in the vicinity. Three young girls, perhaps his daughters, were responsible for keeping the bicycles orderly and attaching reflectors and baskets. At this shop, I found a GIANT brand bicycle of solid construction with 3-gears. It seemed real and there was only one. The smoking shop owner offered us a cigarette and helpfully grabbed another bike for birdMAN. This one was an obvious fake. It was unsteady, didn’t shift well, and had misspellings all over the frame. “多少?” (duō shǎo, how much), we asked. He wanted 900 RMB for the two bikes. birdMAN balked.  He was not crazy about that bicycle. birdMAN cares about quality. He much rather pay a few extra dollars to get something he likes than settle for something cheap, especially for something for high-use.

Xialian noticed that this particular shop also had a few used bikes, among which was a genuine Giant. birdMAN tried it and instantly noticed the superior construction. This bike met all the requirements except it had no basket. Oh well, not a deal breaker. The shop owner wanted more for this bike; after all, this one was genuine. birdMAN pulled out 900 RMB, and indicated this was all we had. OK, deal.

We have had bicycles for a whole week, and have not crashed into anything. birdMAN being a lǎowài, however, did cause a crash. While birdMAN passed a cyclist on a heavy traffic road, the cyclist started staring. He was so distracted that his tires skimmed into the curb and he went flying. Fortunately, he flew into some bushes and appeared unscathed.