Imagine me and you, I do
I think about you day and night, it’s only right
To think about the girl you love and hold her tight
So happy together
-The Turtles


We have been in China for two months. Over these two months, I can say our Chinese has improved--somewhat. At the very least, we have learned to listen for and respond to the following predictable questions.


Answering these questions usually elicit surprised responses. Chinese people do not seem to think people with black hair could be American (“But your hair is black, blacker than mine.”) We can respond in Chinese that we have been in China for two months (“Whoa! You just arrived! You speak Chinese so well!” Not really, but nice of them to say so). As for my age, while nodding and grinning I tell them I am 31 years old (“You look so young. I thought you were 22 years old!” I will be sad when they start guessing my age correctly).  Up until today, I answered the last question as 10 years (“So long! You must have been young when you were married? Do you have children?”)

Now we will change the last question’s response to 11 years. Often the next question is: how did you meet? In our limited Chinese, we can say we have known each other since we were young teenagers. My limited Chinese causes me to withhold the details, such as we became friends after a Chevy’s on the River run and a discussion about who is better at calculus, shared a first kiss after a day of snowboarding, married during college, and spent the next three years eating at the campus cafeteria while doing homework. We learned to love camping, hiking, and bicycling together. We developed a craving for fine wine, pungent cheese and a California’s diverse fruits and vegetables. We bought a house in a picturesque town framed by small mountains, where we grew vegetables and threw summer barbeques with dear friends. Then we gave away or sold most of our accumulated possessions and moved to China. Throughout our marriage, we have enjoyed our family’s support. We have two sets of parents that have been married 40 years plus that love us tremendously. Yes, we have had an incredible 11 years together.

We are so happy – together. Happy Anniversary to us. 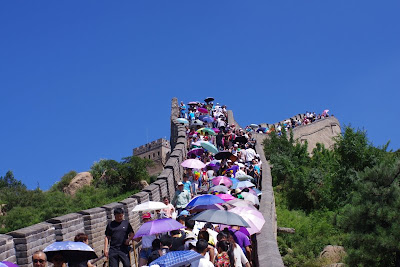 Since the Great Wall (长城cháng chéng) is generally the first item on the “China Must-Do” list for visitors, many of our Chinese friends seemed a little surprised we still had not visited China’s main attraction up to two weeks after our arrival. We weren’t working. The weather was fabulously warm and clear. The Great Wall is really close. So why hadn’t we visited the Great Wall? I guess were just getting accustomed to being here.

After settling in to our new crib, we were ready to venture out like normal tourists. We decided to visit the wall section called Badaling (八达岭), the most popular wall section for tourists. We picked a clear day for our trip. We packed our camel packs with snacks, water, and an umbrella. (I now appreciate the value of an umbrella on a sunny hot day. In the US, the air-conditioned car shaded me. No such luxuries here).

birdMAN carefully planned our route to Badaling. We would catch an early train from Beijing North train station. After the hour ride, we would walk 20 minutes to the entrance to the Wall. There we would pay the 45 RMB to enter, walk its length, and be home early for dinner.

Even the most carefully planned trips are subject to a few kinks – especially when there is a language barrier.

According to the online schedule, a train would depart from the North Beijing Train Station at 8:30 am and 9:30 am. We arrived at the station a little before 8 am. A guard stopped us at the entrance and pointed to a sign that read 10:57 (along with some other Chinese writing). He indicated for us to go away. birdMAN was convinced that there was an earlier train. The internet is never wrong, right? So we used another entrance, swiped our metro cards and entered. All the signs read 10:57 departure for Badaling. That guard was trying to help us after all. Thankfully, a Starbucks was nearby.

A few hours and a cup of coffee later, we entered the train station again and swiped our metro cards. For some inexplicable reason, each of our cards decreased by 20 RMB. What? The train ride is supposed to be 5 RMB. We aren’t sure, but maybe there is a penalty for not swiping upon exit.

We arrived at Badaling around 12:30 pm. This part of the wall is pretty developed having several restaurants, grocery stores, and a bustling KFC (yes, we did eat there). The weather was clear—great for seeing the Great Wall snake along the mountainous terrain. The weather was also hot – not good for wearing make-up or smelling fellow sweaty, stinky tourists.

The tourists were like Chinese paparazzi seeking photographs of foreigners in action. One very dark skinned family (African maybe), was surrounded by picture takers. They couldn’t even walk. Several snapped photos of birdMAN. Some were discreet. Some asked for us to pose with them for several shots, and then wait while the friends exchanged places so each could have a photo with a foreigner. A group of teenage boys were brave enough to ask for a picture with me, but got shy when I had difficulty understanding the question. Once I understood, I was happy to give them a quick English language lesson: “Repeat after me, ‘May I take a picture?’”

I am impressed with the people who climb the steep sections of the Great Wall. Elderly people. Babies. Pregnant ladies. Ladies dressed in office attire and heels. And there are tons of them! Hiking the Great Wall is not an easy feat. The sections are extremely steep and slippery.

Especially steep sections have a metal rail for hikers on which to hold. These parts reminded me of climbing Half Dome in Yosemite Valley, where a similar rail is nailed to the rock to prevent climbers from falling to their deaths.  We came across a middle aged couple clearly fighting exhaustion to get to the peak (of that section anyway). The wife clinging to the hot rail, her teeth gritted, breathing hard as she carefully placed one foot in front of the other. Her husband cheered her on “加油!” 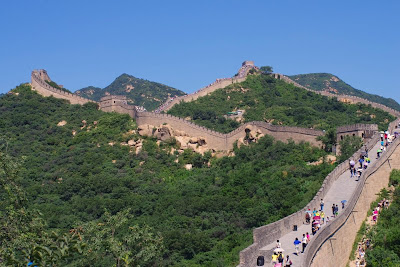 The Great Wall definitely belongs on the “China Must-Do” list. If you can handle the crowds (actually, don’t come to Beijing if you don’t like crowds), the hike is awe-inspiring. The mountains are green and lush, and wall is quite beautiful -- the magnitude is impressive and difficult to describe.  Definitely, the Great Wall is where it’s at.

Chinese word of the blog: 加油! jiāyóu (literally, add gas)
English translation: You can do it!
Say jiāyóu! to someone who makes extra effort to cheer him/her on. 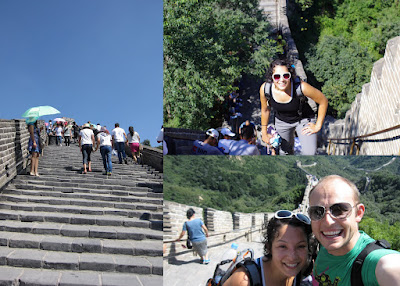 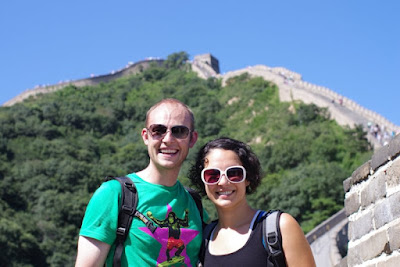 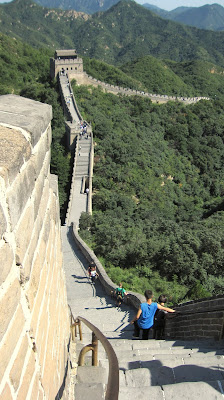 I spent the summer wasting 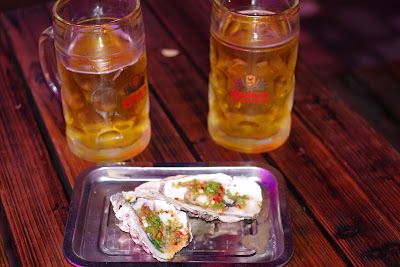 I would not call going outside the apartment in Beijing relaxing. Usually we wake up to a smoggy sky, which immediately casts any Californian into a bummer mood. Then travel is by foot, bike, bus, or subway – all of these modes require the utmost alertness. You never know when a taxi will use the bike lane or sidewalk as a passing lane and practically run you over. The rule is simple: Don’t get hit and don’t hit anybody. You can turn wherever, cross the street wherever, and travel whichever direction you like. No problem.

So how do people with no jobs find a way to relax? Simply, massage and beer.

Something must be understood about Chinese massage—it is nothing like Swedish massage or deep-tissue massage. There is no ambient music, or silent isolation with a lone masseuse who talks in a low a voice and smells like lavender. In China, the massage room is full of masseuses and clients chatting, fans blowing, and TVs blaring.

We returned to a massage place we visited two years ago on our first visit to Beijing. Having no translator, we reviewed the hanzi characters for massage, 按摩 ànmó. Amazingly, we remembered its location, tucked behind a shopping mall in a charming neighborhood where no English is to be found. Somehow, we conveyed to the receptionist we want a two hour foot and body massage.

We started with an hour foot massage – absolutely heavenly. Firm and strong, the foot massage involves finding pressure points. Somehow the masseuse can determine if the body is undergoing any problems or conditions. Years ago, a masseuse correctly determined my friend was pregnant before she knew herself.

The Chinese masseuse tends to be chatty during the foot massage; which is understandable because the client and the masseuse face each other. The chitchat is a good opportunity to practice speaking Chinese. Our vocabulary is severely limited, so the conversation involved where we are from and no, we don’t have children. birdMAN’s lady pointed to his pink toenails and laughed. We tried to explain it was our niece’s handiwork, but I didn’t know how to say niece. We are pretty sure we conveyed that a child painted his toenails.


After one hour, we moved on to the body massage. No disrobing required. The masseuse laid a white sheet over my prone body on the massage table and went to work. The massage is firm and strong, and sometimes painful. Occasionally, the masseuse would concentrate on a particular area, pressing and rubbing the same spot over and over and I gritted my teeth, aching for an end. Just when I must say something to stop him, he is satisfied that he solved the problem area and moves on. I do not understand the physiology of it all, but afterward, we are sore and elated. birdMAN and I left the massage uttering “They know what they are doing.”

After the massage we walked around looking for something to eat and wandered into an outdoor beer garden. The Beijing beer garden is similar to a German beer garden, except instead of sauerkraut and sausages, we find barbequed squid, duck heads and noodle bowls. We determined our evening snack when we smelled and caught sight of barbequed oysters, birdMAN’s favorite.

Clueless and confused, we wandered over to the cashier. There was an authoritative looking man standing by the cashier who took one look at us and must have determined that we are American. And what thing would two Americans wandering around a beer garden want? The answer was obvious. He said, “啤酒。十八块,” which translates, “Beer. 18 RMB.” birdMAN, immediately recognizing the word for beer, nodded emphatically yes! Then we pointed to the oysters. He brought us each a liter of beer and delicious oysters. We savored the rest of the cool and relaxing evening, euphoric after massage, beer, and oysters.