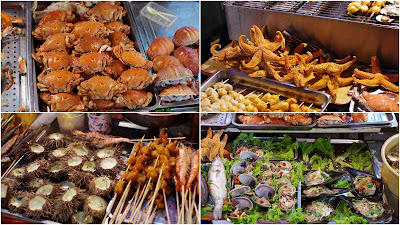 During last week’s National Holiday, we escaped Beijing by fast train and sojourned in Qingdao. Qingdao (青岛) is a hot destination for tourists, called the “City by the Sea” and valued for its temperate climate and abundant seafood. And yes, the seafood was abundant.

Upon arriving last Tuesday evening, the brine-laced breeze welcomed us. We breathed it in—ahh, air cleansed by the sea. As we proceeded up the narrow sloped streets, we passed several restaurant patrons sitting at collapsible tables and small stools. Set before them were plates of clams, fish, and shrimp swimming in garlic, ginger, and spices. The restaurants did not need menus. Instead, the food was displayed in tanks and bins: crab, shrimp, octopus all awaiting their fates. We could barely wait to enjoy Qingdao’s claim to fame—the seafood and beer.

We stayed at Kaiyue International Hostel, in the old district of Qingdao. The hostel was once a church, but now a haven for foreign travelers. The reception and wait staff speaks decent English and the cleaning staff is hyper-vigilant about mopping the entire place over and over again. The hostel has a comfortable lounge with wifi, pool tables, guitars, and a bar. The menu features several European and American dishes, including breakfast baked beans. We had the French toast, and it was delicious. Outside of the hostel, we rarely ran into foreigners (meaning non-Chinese). I think they were all in the lounge (or maybe sleeping), smoking cigarettes, drinking beer, and cursing about who knows what. While we enjoyed spending the late afternoon in the lounge reading our electronic tablets and studying Chinese, we departed once evening fell and the lounge turned into a smoky party/bar.

Our room was simple and clean with a shared bathroom. We were at the end of the hall immediately adjacent to the bathroom, so I could hear all the foot traffic headed our way and toilet flushes all night. Throughout the first night, I listened to hacking, gagging, and other sounds of someone who was violently ill (too much seafood?). Despite sharing a bathroom (and hearing toilet flushes), we would definitely stay there again. The hostel is clean and comfortable in a great downtown location, and the price is cheap-- 160 RMB (~$25 USD) per night for two persons in a private room.

The old part of Qingdao features German type architecture, which made us feel like we were in a bizarre version of an old European city. Among the cobble streets and ornate light fixtures were crowds of Chinese people selling vegetables and chickens in small cages on the sidewalk. Near the university, we found very charming coffee houses with picturesque courtyards. We mostly ate at outdoor restaurants that sold cheap beer and had menus entirely in Chinese. Somehow we were able to order food (thank goodness we know how to say rice, vegetables, beer, and ask how much things are). It is very Chinese in Qingdao, meaning nobody spoke English and most the signs are Chinese. I am glad to report our first trip by ourselves was a success, with a few inconvenient setbacks.
As mentioned earlier, we could not wait to eat the seafood. Many restaurants display the seafood selections on large tables making it easy to point and order. birdMAN eyed a restaurant  with whole crab and decided that crab is what he would eat. Before sitting down, I asked the server how much did a pitcher of beer cost?  I am 99% positive she told me 13 RMB.  Sounds good. So we ate like gluttons enjoying crab, clams, giant clams, shrimp, and squid along with a pitcher of beer.  After we added up what the meal should cost, we asked for the bill. A different server brought the bill and told us we owe over 170 RMB. What? We had calculated closer to 150 RMB. Why? we ask. He told us the price of each item. The price of the beer was 38 RMB. We hesitated. Didn’t the other server tell us 13 RMB? We half-heartedly disagreed, but the server was adamant.  38 RMB. You must pay 38 RMB. Since we were uncomfortable with the language, we paid.

After leaving, I was pretty annoyed. I started asking nearby restaurants how much a pitcher of beer cost. The cost ranged from 8 RMB to 18 RMB. We are pretty positive that the server took advantage of us and overcharged us royally for the beer. In retrospect, I wish I had gone to another table and asked the patrons what they paid. Or demanded to see a price list. I do know the hanzi for beer. But we yielded, and allowed ourselves to get swindled. What’s the lesson? Be pushier and demand foreign and Chinese tourists get equal treatment!

The worst outcome of that meal was not that we overpaid, but that I became horribly ill the next day (more on that later—the subject deserves its own blog).

Afterward, we were much more careful about establishing the costs at restaurants. A few days later while near the famous Qingdao brewery, we were on the hunt for a pitcher of green beer, a specialty beer infused with spirulina. We walked by several restaurants with beckoning servers, “Sit here! We have the best food and the best beer!” We would ask how much is the green beer (绿啤)?  We were told 80 RMB at three restaurants. At the fourth restaurant, the server actually showed us a price list and pointed to the price, 60 RMB. We were sold! So we sat outside, enjoyed the clean air while leisurely sipping green beer. Supposedly the beer is good for health. I found it refreshingly easy to drink. And I admit I was very relaxed afterward.

Qingdao is a quick and easy get-away from Beijing and near the ocean with a number of beaches. The weather is pleasing. The people are nice.  Qingdao self-proclaims it as the “Center of Beer Culture” (I think the Germans might disagree.)  Just confirm the prices and don’t eat too much seafood at once. 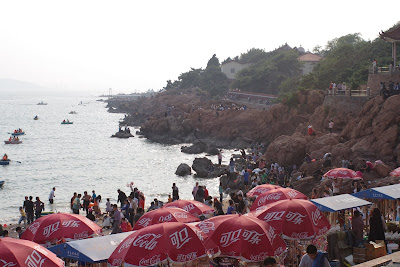