You got to know when to hold 'em, know when to fold 'em
Know when to walk away and know when to run
You never count your money when you're sittin' at the table
There'll be time enough for countin' when the dealing's done
-Kenny Rogers 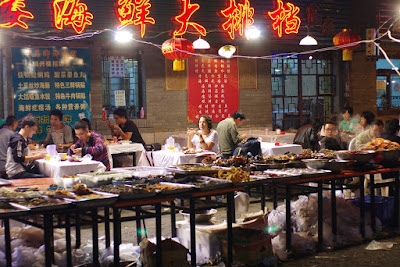 Milk additives that kill children, agricultural crops irrigated with human waste, bathrooms with open trough toilets and no running water –therefore increasing the risk of spreading fecal borne disease. These stories from China make any foreigner shudder, especially one accustomed to the FDA’s regulations and the organic food selections at the co-op supermarket. So foreigners exchange food safety advice – peel fruits and vegetables, don’t eat anything raw from a restaurant, and stay away from food carts. Even so, a foreigner will inevitably suffer stomach woes.

So naturally, a popular conversation topic among foreigners is food poisoning – how many times, what caused it, and how bad was it. Swapping sickness stories always results in good entertainment (but only long after the event). For the last two months, birdMAN and I have proudly proclaimed, “We eat whatever we want – street food, raw foods, unpeeled foods. And we have NOT been sick. We have immune systems like steel. Stomachs of iron.” Hah! That is no longer true.

As mentioned in the previous blog (Octopus’s Garden), we could not wait to eat the seafood in Qingdao. We threw caution to the wind. Clams, crab, oysters, squid, and shrimp all picked from a street-side display, eaten without rice and without restraint.


The day following our night of seafood gluttony, we planned an excursion to Lao Shan (崂山). Lao Shan, a coastal mountain, is a reputedly a must-see in Qingdao. Along with the droves of people eager to see Lao Shan, we stuffed ourselves onto a packed tour bus. No seats for us. We stood at the front of the bus and found a wall on which to lean. The traffic was so congested that the 1 hour bus ride turned into a 3 hours. As I stood and eventually leaned against the bus wall, I experienced the first signs of stomach distress. A few pangs here and there.

Upon arriving at Lao Shan, we were so tired of the bus (and people). We made our way to the entrance. The first thing we noticed beyond the lines of people entering the gate, not a picturesque trail to stroll up the mountain, but MORE BUSES. An information sign said that the entrance fee was 130 RMB and to protect the environment, visitors will board the bus to the scenic area. We agreed that paying 130 RMB each and stuffing ourselves on another bus was the last thing we wanted to do. My stomach hurt anyway.

As a side note, Lao Shan has the worst bathroom I have ever visited. No privacy with open holes that chute to a ditch outside of the bathroom building (for everyone to see). If you visit, just prepare yourself. After a visit, you may feel like you developed food poisoning. Fortunately, I had no major discharges here.

Instead of getting on the bus, we walked along the highway back towards Qingdao. About 30 minutes later, intense waves of stomach cramps caused me to stop and lean over. After a minute and the pain subsided, I could walk again. I imagined that this is what contractions are like before giving birth. birdMAN flagged down a taxi driving the opposite way. Much to my relief, the taxi U-turned to pick us up. The taxi dropped us off at a beach about a 20 minute walk away from the hostel. We were in Qingdao and hadn’t seen the beach yet, so why not? I thought I could tough it out, but the smells wafting from the squid and hotdogs grilling at snack carts were too much. I found a place with relatively few people and vomited in a bush. The nausea combined with my stomach cramps told me this was going to get ugly.

And ugly it did. I will spare you the details, but a few hours later my body had emptied. Stupidly, I had left my stock of gastrointestinal medicine in Beijing. Meanwhile, birdMAN left me in the hostel to explore the nearby area. Why should he suffer with me? That night I felt better, probably because there was nothing left in me. I ate noodles for dinner while birdMAN ate a crab.

That night was pure illness. I felt bad for the people staying in the room next to the women’s bathroom. The next morning, birdMAN learned how to read the characters for pharmacy (药店) and we ventured out of the hostel in search of a cure. I did not make it very far. I will again spare you the details, but I called birdMAN a few minutes after we parted ways and told him to buy some laundry detergent.

birdMAN continued down the street stopping at a few stores to ask “附近哪里买药?” (Nearby where buy medicine?) Each store pointed him the same direction. He knew he reached the right place when he saw this sign:

So he went inside. He found himself surrounded by 6 Chinese people in lab coats trying to understand his problem. He said “我的太太... 腹泻” (“My wife…diarrhea”).  They got the point. After about 30 minutes of meeting with the doctor and listening to her instructions, birdMAN walked out of the clinic with a bag of medicine. He had succeeded.

Over the next three days, I took green herbal pills, two different powders mixed with water, a tube of white goop, and some pain medicine. The concoction cured me! But I would have no more seafood during my stay in Qingdao. Our final night in Qingdao I ate a rice bun and birdMAN ate his third crab.

birdMAN, however, did not escape unscathed. His three nights of unrestrained seafood consumption eventually caught up to him. He didn’t get as sick as me, but for about four days after leaving Qingdao, he needed Pepto-bismol pills and for caution’s sake, to stick close to a bathroom.

What’s the lesson? You have to know when to eat, and when to run. Don’t take any chances. Don’t forget the anti-diarrheal medicine at home. Eat a lot of rice with seafood. And if at all possible, avoid the Lao Shan bathroom.