And if it's crowded, all the better,
because we know we're gonna be up late.
But if you're worried about the weather
then you picked the wrong place to stay.
That's how it starts.
-LCD Soundsystem 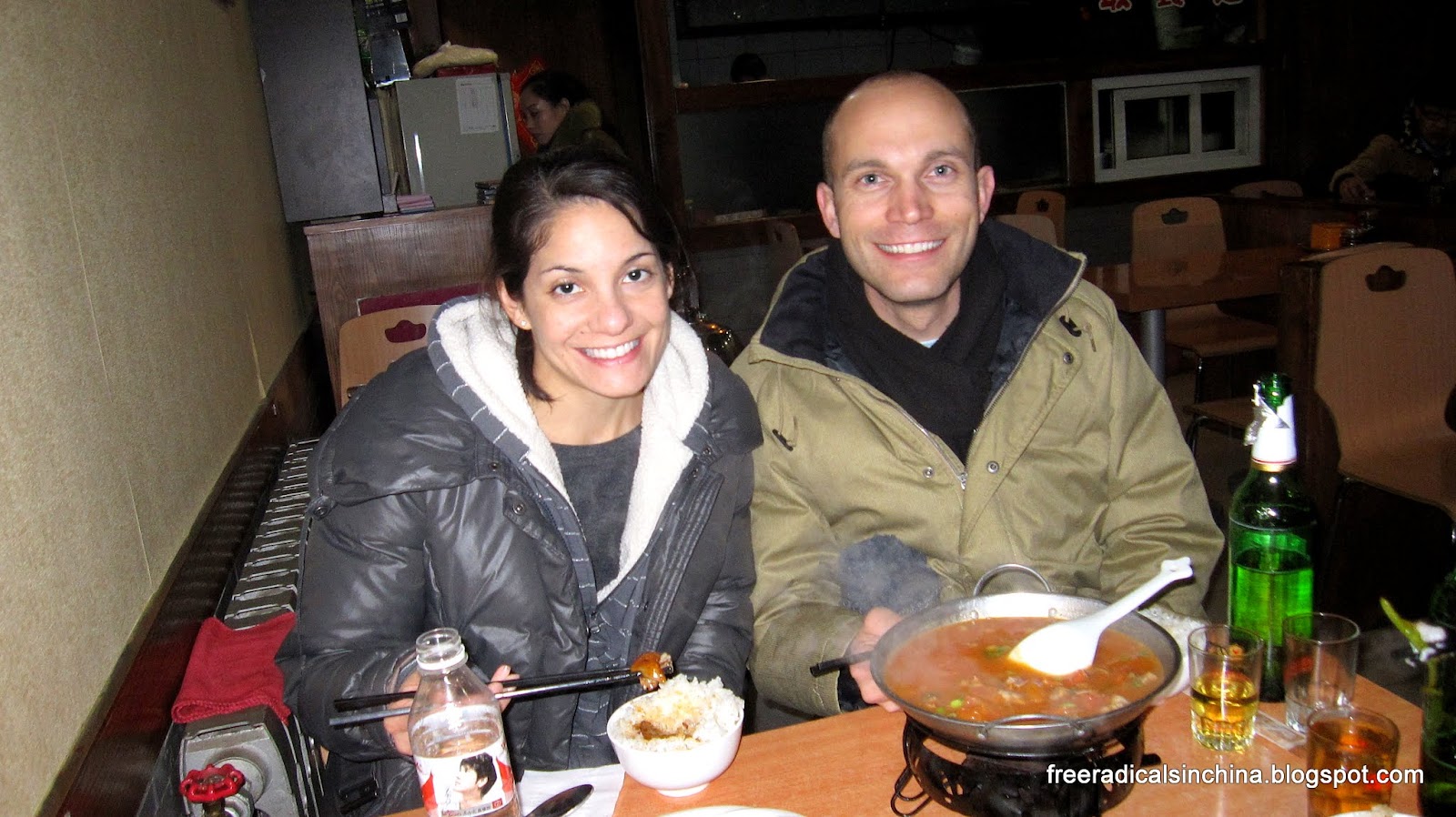 After months of planning, obtaining a visa, packing for frigid weather, accumulating my list of wants, and a 12-hour plane ride, my sister and her husband finally made it to Beijing. We were so happy to see each other that we barely noticed the metallic taste and smoky smell of Beijing smoggy air. I chattered their ears off as they struggled to stay awake during the 45-minute taxi ride to our apartment.

G and J are pretty good sports. We have a one bedroom apartment; so for three weeks we will be constant companions. The lock on the bathroom door is broken; so we will have to be careful not to encroach on private time. We don't have a dryer; so their clothes will be as stiff as boards after air-drying. They do not speak Chinese; so they will be at our mercy for translation (accuracy will be an issue). They will carry toilet paper at all times and use squat toilets. They will get squashed on a overcrowded subway ride. They will be confused. They will be overwhelmed. They will poorly pronounce "谢谢" (thank you). They will be relieved to hear someone speak English to them. Yes, they will live like us for at least three weeks. It will be such fun! 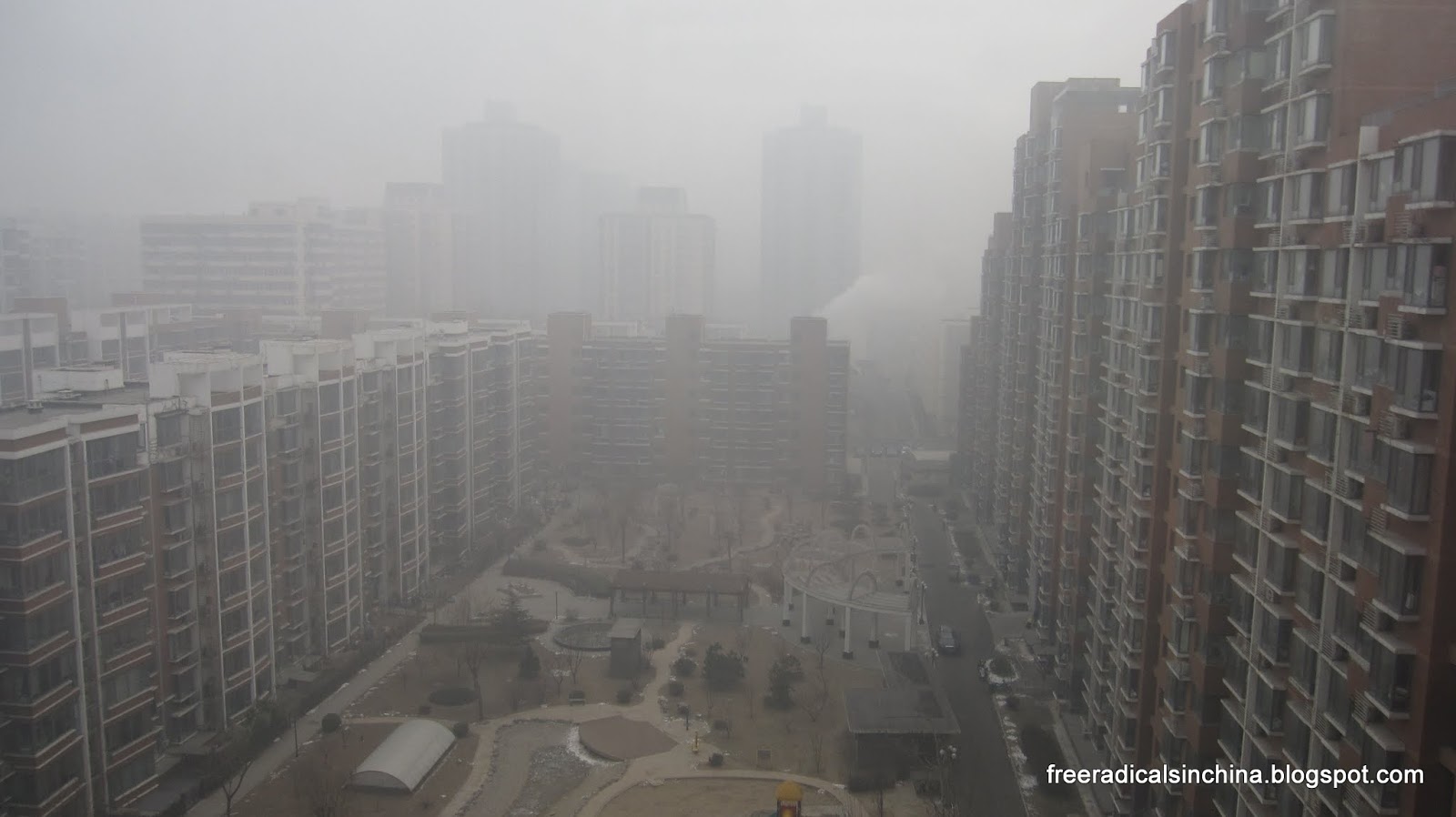 We made like the birds and flew south during the winter. But the birds are smarter than us. While they stay out of the cold for three months, we spent only two blissful weeks in Thailand. I found myself reinvigorated there. I awoke at 7 am, eager to run along the beach. I had forgotten how much I missed being outdoors in the warmth and the clean air. We mountain biked down Chiang Mai’s slopes, climbed Railay’s rocks, and snorkeled Koh Rok’s reefs. Meanwhile, Beijing was suffering some of the thickest pollution on record.

Via my e-reader and the hotel’s WiFi, I read the headlines: “'Worst Smog Ever Hitting Beijing, Environmentalists Say” and “China's State Media Finally Admits to Air Pollution Crisis”. Oh my, I thought, I am glad I am here and not there. Then I jumped in the ocean, let the sun enhance my tan, and forgot Beijing exists.

You might have heard about the habit of public nose picking in China. I bear testimony, it is true. I have even seen one of my students stick his finger in his mouth after a deep plunge into his nostril. (Bear in mind, I teach university students--not five year-old children. And yes, my stomach churned.) But if you lived here, you might have a little more sympathy. There is always gunk in your nose! Likely the nose gunk results from breathing in the smog, the cigarette smoke, the coal dust, the regular-kind dust, and all the other pollutants pervasive in an overcrowded, industrial city.

I must confess, I have developed a habit of cleaning out my nose—with a tissue—whenever I use the bathroom. Unfailingly, something needs to be cleared out. Afterward, I breath deep with no obstructions for at least an hour. I found that this habit in Thailand was not necessary. My nostrils were clean and dry. I could breathe deeply letting the air and sun energize me.

Returning last night to Beijing’s notorious smog was quite a jolt to the senses. And I am back to cleaning the gunk out of my nose. A systematic, automatic habit. I just hope I don’t forget my manners and do the necessary deed in public.

Contrary to what many of our friends and family feared, living in Beijing is not like living in the dark ages. Starbucks, KFC, and McDonald’s are easily accessible. Grocery stores are stocked with Dove dark chocolate, Loreal make-up, and Doritos. Last week we ordered a vacuum cleaner online. The vacuum was delivered the next day, at which time we paid cash on delivery. Shopping for clothes, shoes, accessories, furniture and electronics is not a problem. Nonetheless, Beijing does not satisfy every desire for a native Californian.

I am super excited that my younger sister and her husband will be staying with us for three weeks during February. Having family come all the way from California—what does that mean? It means I make a comprehensive list of all the things I want from my home country, and my sister will dutifully gather these items and bring them to us.


Other items we would like but not transportable include:


Some of the listed items can be found in Beijing. I heard that Jenny Lu’s has cheese, spices, and tortillas. But these items are more difficult to find and limited in selection—plus expensive for a person trying to live frugally.  So I eagerly anticipate to things coming from home. And of course, spending time with one of my best friends in the whole world – my sister! 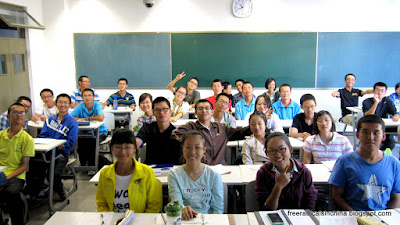 Teaching English to a crowd of Chinese university students is a big leap from our engineering jobs in California. birdMAN and I traded our offices for a classroom, and sitting before a computer for standing in front of some 40 students (per class). Instead of marketing our firms to City agencies, we market English to shy 18-year olds who live, breath, and sleep tests and GPA. We endeavor to make English interesting by performing ridiculous skits, telling corny jokes, and sometimes discussing serious topics. Teaching English is something that I do with a lot of confidence, probably because chatter in general comes so naturally to me. Put me in front of a crowd of eager-to-please, easy-to-entertain, and very respectful Chinese college students—I just thrive.

Last August, we came to Beijing with a vague idea of what we would do here. Then we received our schedules. The official title of the classes were “Listening and Speaking for Academic Purposes”—that is, oral English. I was to teach 8 two-hour classes. birdMAN was to teach 9 classes. Each class was once a week with a roster limit of 40 students. Yes, that is a lot of students to keep straight.

The majority of the students are first-year students, so they had just left the comforts of home for a fiercely competitive and busy college life at one of the most elite universities in the world. They came from all over China-- Yunnan, Inner Mongolia, Guangdong, Jiangsu, Hebei, Hunan, etc.  Mixed in amongst the Chinese were students from Japan, Korea, Thailand, and Myanmar. They came to us wide-eyed and timid. They left our class slightly less wide-eyed and timid.

Ok, so back to the beginning of the semester. We understood a few things about the students and the class:
Otherwise, we had a lot of freedom to develop our own curriculum. I never planned the class activity until Monday morning, a few hours before the first of the week’s 8 classes. Usually, I was in panic mode agonizing whether the students will benefit. The first Monday class was what I called my crash-and-burn class. By Thursday, my lecture and activities were smooth sailing and highly entertaining. I feel bad for my Monday class.

Here are some helpful tips if you ever find yourself teaching oral English in China:
We received very positive feedback from our students. Many students told birdMAN, “I have never taken a class like this before.” After performing an exceptional Shakespeare monologue, a student told me that she has never acted out anything before. She found the experience pleasing and it raised her confidence in public speaking. Many of them said they looked forward to English class –a place they felt at ease and joyful. All of them said their English improved.

Now that is satisfying.

But not all students walked away from my class exhilarated. Some of them actually complained I didn’t assign enough homework! What a bunch of over-achievers.

Is Shakespeare too difficult for students learning English? No way!
Posted by BJ FU at 5:07 PM


We have moved for the fourth time this year and for the second time in China.

Living in this apartment is much better than living in the dorm for the following reasons:
At first inspection, the apartment seemed reasonably clean (except for the bathroom – pretty bad). But after moving in, the grime became a glaring plague for me. Hand prints all over the doors, grease build up on the stove top and kitchen walls, all the kitchen handles black with dirt and oil,  the originally white kitchen grout now black,  and the drapes brown with dust and cigarette smoke. Apparently, if a doorknob is never cleaned, the oil from multiple grabs eventually builds up to a black layer of grease (I am not exaggerating). My arms are sore from all the scrubbing. Also, after washing all the drapes and a month of living here, the cigarette smoke smell has finally faded.

Of course not having a maid means we are solely responsible for keeping the dust to a tolerable minimum. After one day, the dust accumulates to about what was a week’s worth back home in California. Oh well. As I say very often here, “没办法.” (méi bàn fă There is nothing to be done about it).

But it is HOME! And we love it.