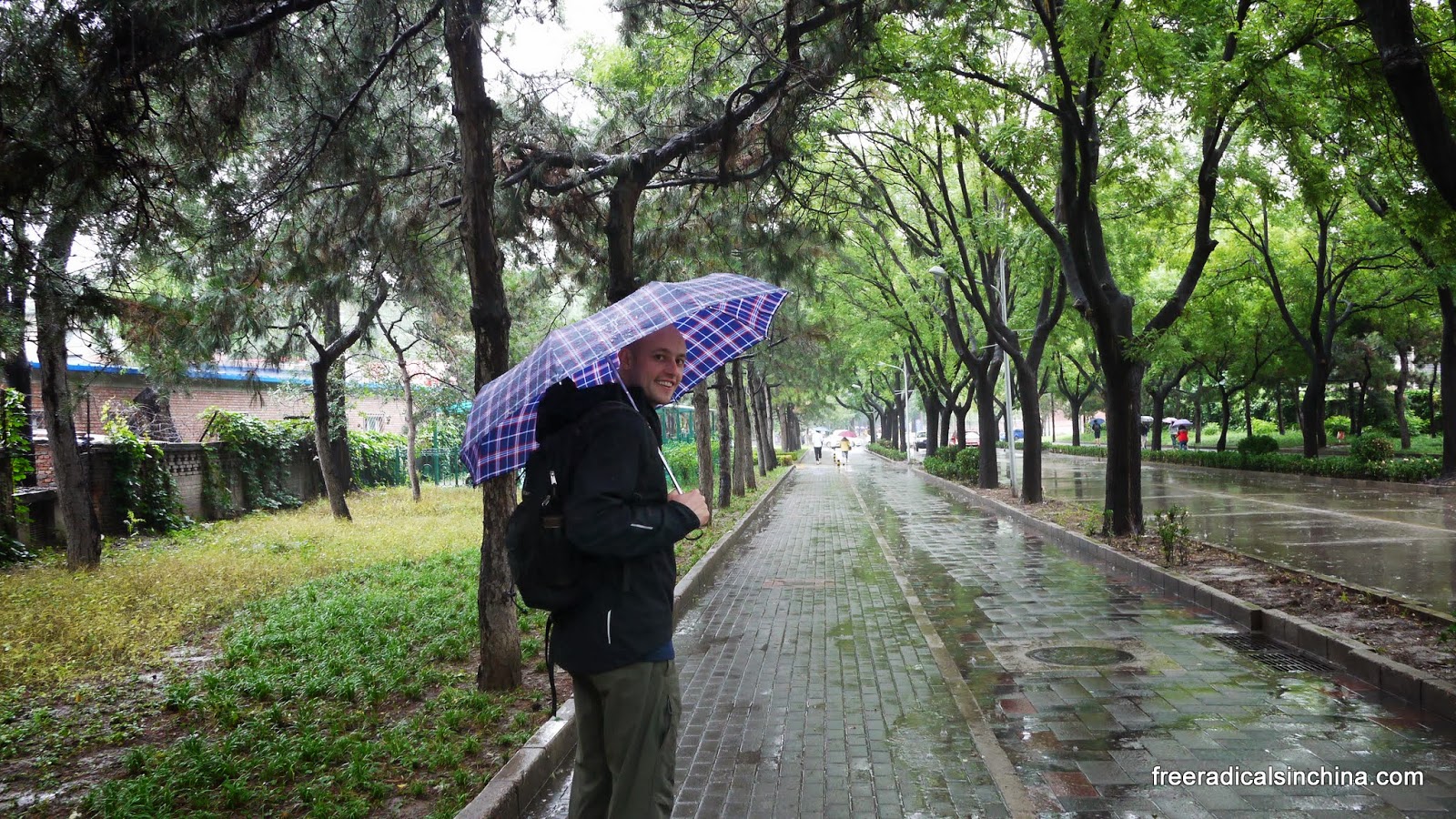 Beijing is one ill-tempered lady. Her mood swings are wild, intense, and unpredictable.

Today, the crystal clear skies allow the sun’s rays to blast Beijing with full force, raising the temperature to 97 degrees F. After sweating through the morning on my bike, I seek refuge from the blazing heat in an air-conditioned coffee shop to study Chinese and enjoy a latte. A few hours later, a thin layer of clouds develop providing some shade. I think, Yay! My 5-minute bike ride will not be too miserable. Between the coffee shop and home I stop twice – once to buy a half of a watermelon and second time to buy dish soap. By the time I arrive home, about 15 minutes has elapsed.


After entering the apartment and setting my things down, the front door heaves as though taking labored breaths. What in the world? Then I hear the whistling as wind squeezes through the door and its frame. Bang! Bang! Out on the patio, the window doors clang open and shut with the oscillations of the wind. I close the windows and watch as the wind whips up plastic bags and papers above the 12th floor, where we live. The sky soon turns brown with sand, dust and garbage flying through the air. The trees bend over in submission. Ms. Beijing is at it again.

Then rain begins to fall into the swells of the wind, rendering umbrellas useless. People scurry across our apartment compound, clinging to their umbrellas, hats, and children. If only they had arrived home 10 minutes earlier like I had. Wind. Lightning. Thunder. Rain.

Ms. Beijing is having another temper tantrum. Maybe she is in a fight with Mr. Shanghai.


Last week, birdMAN and I found ourselves at the mercy of Ms. Beijing’s fury. That day, the air pollution had been severe, so determining whether rainclouds hovered above the brown haze was pretty much impossible. Thus, in our oblivion, we carried zero rain gear. After a very pleasant evening at a friend’s house, the sky poured buckets and buckets of rain, unleashed howls and howls of wind, and dispatched flashes and flashes of lightning—all accompanied by booms and booms of thunder. The hour was late when we left, so we had to go home. There was no choice! Thankfully, a friend (who was fully prepared with two umbrellas and a rain poncho) lent me an umbrella. The heavy rains combined with the poor street drainage made the 10-minute walk home like wading through a shallow stream, except the stream is full of dirt, garbage, and probably—mmhhh, positively—raw sewage. It is best not to think too hard about it. Despite the umbrella, I arrived home drenched, my once blue and white sneakers now blue and beige.  As for good news, I had no open wounds (save for some mosquito bites) and have thus far not developed any infections from wading through contaminated water.

As for today’s temper tantrum, it is over now. The skies have cleared. The parents and their children have resumed playing in the playground. And just like every other non-stormy evening, the children’s giddy laughter mix in with the buzzing of electric scooters and drift into our apartment. A sweet, summer lullaby. That is until Ms. Beijing strikes again.

Check out this video of the June 11 rainstorm!