No trophy, no flowers, no flashbulbs, no wine,
He's haunted by something he cannot define.
The sun has gone down and the moon has come up,
And long ago somebody left with the cup.
But he's striving and driving and hugging the turns.
And thinking of someone for whom he still burns
He's going the distance.
He's going for speed.
-Cake 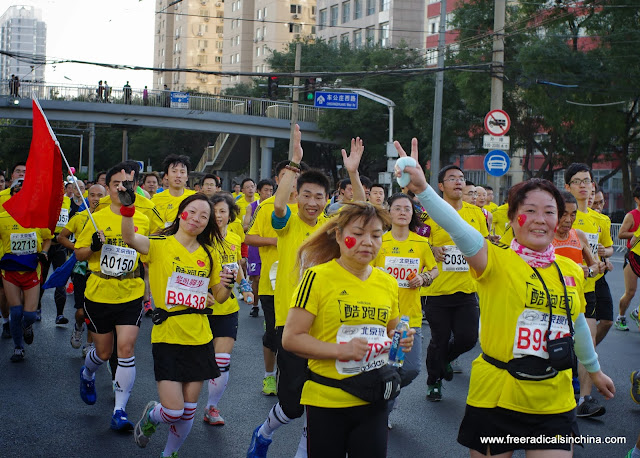 Early on October 20, my girl LK and I along with some 30,000 runners gathered in Tiananmen Square under Chairman Mao’s smug mug. We came decked in bright yellow Adidas jerseys, spandex shorts, and IPods. Some wore neon running shoes. Some were barefoot. Some dressed as storm troopers. We came from China, the States, Europe, Africa and other distant places. We were ready no matter what— come rain, come sun, come smog. Yes, October 20 was race day. It was the Beijing Marathon.

Thanks to the armies of police and strategically placed safety tape, twenty-six miles of Beijing roads were clear of the normal congestion of buses, taxis, automobiles, and honking horns.  The prior day’s breeze had blown Beijing’s notorious smog out of sight and out of mind. The sun warmed the air and gentle breeze boosted the runners’ energy.  It was as though Nike, the Greek goddess of victory and speed, spread her wings and bid heaven and earth into submission.

In our excitement, we scarcely noticed the time or that we were standing in the wrong place. Oops. After a slow start, we hit a steady rhythm. En route, LK and I talked about our families, our teenage years, marriage—you know— girl stuff. Before we knew it, we had gone 13.37 miles in 2 hours, 22 minutes. (Did you think we were going to run 26 miles? We opted for the half-marathon distance and we are proud of it!)

We didn’t break any records. We left that to Tadese Tola of Ethiopia. He blasted through 26.2 miles in two hours, seven minutes and 16 seconds. That’s less than a five minutes per mile pace, folks. For 26.2 miles. Yep, 26.2 miles.

The run course was very organized and amazingly managed. Seeing the eight lanes around Tiananmen Square devoid of traffic was incredible. Plenty of water and Gatorade were provided along the course. No food was provided for the half-marathon course. According to the Beijing Marathon guide, food was available to marathon runners.

This run, however, was very crowded. Near the finish, runners slowed to a turtle pace. LK and I sped up slightly at the end and had to dodge around the slowing runners. I even felt good enough to semi-sprint to the bright yellow banner that read “FINISH.” LK felt more awesome and left me in the dust.  To my chagrin, a wall of people that had stopped 10 to 20 feet in front of the “FINISH” banner to take pictures stopped me in my tracks. Navigating through the crowd like I was in rush-hour subway traffic was a rather anti-climactic end to a triumphant run. Oh well. China just has so many people-- people that that like to stop and take pictures right before finishing a run.

I paid a steep fee of $65 USD to participate. If I were Chinese, I would only pay 80 RMB ($13 USD). Besides wishing the run were cheaper, I regret nothing. I love having a goal for which to sweat and train. After the race, I walk – I mean, run— away with the following: 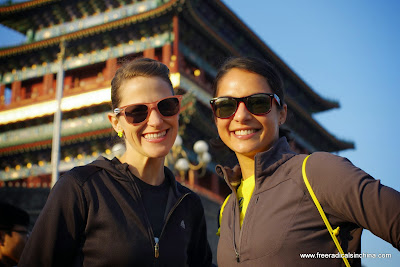