Ain't No Rest for the Wicked 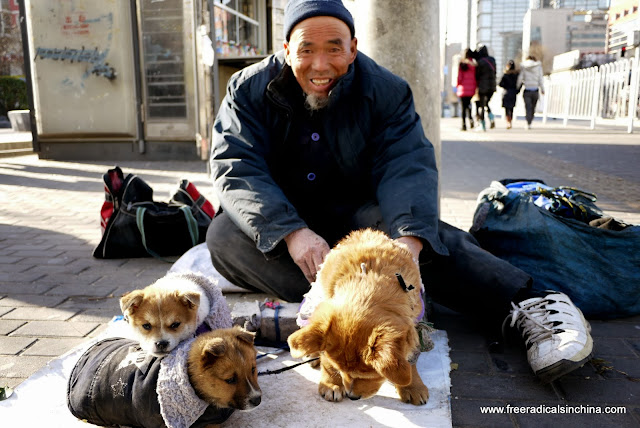 A few weeks ago, an icy wind blew through Beijing. That icy wind did not just freeze Houhai Lake and chase away smog, it also managed to freeze my cold, cold heart.

I had heeded the weather forecast of the imminent frigid wind and packed extra clothes for my long day away from home. Packing a scarf, hat, a set of gloves, along with other normal necessities makes for a cluttered backpack…and a huge hassle to find smalls things—like a wallet.

So you can imagine my dismay when I realized I had forgotten my subway card. Not properly prepared today. Sigh…I have to buy a ticket. In front of the subway entrance where a beggar and his three puppies frequently take post, I dug through my abyssal backpack. Ok, found my scarf. That’s easy—I brought the extra thick one. Ok, hat… gloves…oohh, gum!...notebook—do I really need that today?...lotion—Beijing is so dry…camera—so heavy, but I need it…oh, stupid wallet where are you?…Aha! Finally, found my wallet.

Xialian had been patiently waiting for me as I dug around in my backpack clutter. Now properly prepared with 2 RMB in hand, we bought a ticket, had our bags x-rayed at security, and proceeded to the upstairs platform to await the subway train.

Here, I realized one glove was missing. What use is one glove? I had just spent 25 RMB on these extra-thick woven gloves. Also, the icy wind boded a cold evening at one of our favorite hangouts, Great Leap Brewing. Great Leap is tucked smack in the middle of a confusing maze of alleys, where surely the fierce wind would freeze any unprotected extremity, such as an ungloved hand.

Certain my abandoned glove was just outside the subway entrance, I left Xialian with my full backpack and ran downstairs. After convincing the subway guard that I had bought a ticket and would be right back, I ran outside and scanned the sidewalk and the surrounding areas where I had just stood. No glove. Reluctantly accepting that I lost an article of very necessary clothing, I turned back toward the subway station. Immediately I caught sight of my glove. The glove was snugly on the right hand of the beggar (the one with the puppies).

Aha! My glove. Maybe I will not freeze that night after all. I walked right up to him and said, “Thank you found my glove! That’s my glove! I lost it! Thank you, thank you, thank you!” He protested mildly as I pulled the glove right off his hand. I can’t imagine how ludicrous I must have looked, a foreigner stealing a glove from a beggar.

Obviously, I don’t believe in “finders, keepers,” but my conscience did stab me with mild remorse. Through rain, cold, hot, wind, that dedicated beggar asks for small change. How could I take a glove from a man in such a pitiful state? Yes, Beijing wind has chilled me outside and in.

Wanting to right my woeful wrong, I carried an old pair of gloves with me. Every time I passed through that subway stop area, I looked for him. Two weeks later, I finally caught sight him cuddling his puppies. As I approached him he smiled, probably anticipating a few renminbi thrown his way. Instead, I held the gloves out to him and said, “Do you want these?” He smiled, grabbed them and placed them in the large satchel beside him. He told me something about his puppies that I did not understand. I walked away with my bag two gloves lighter and my conscience clear.

That evening, I relayed my tale of the lost glove to a group of friends. One of my Aussie gal pals gasped in surprise. About 30 minutes before I gave the begging man a set of gloves, she too had given him an unwanted pair. That means the beggar got two sets of gloves within an hour. Sheesh, I guess life on the street hasn’t been too bad.

*Beijing Transportation Card: Getting around Beijing is easy and cheap! Buy the pre-paid subway card to ride the subway, city buses, airport buses, and even buy drinks at some vending machines. Each subway ride is a flat fee of 2 RMB ($0.30 USD) and a bus ride will set you back 0.40 RMB ($0.06 USD).