Once a week, I travel by subway to a bustling station where I, along with about a million other people, spill into an adjacent intersection. This intersection is clogged with cars and buses honking at each other and at the pedestrians weaving through any unoccupied space. It doesn’t matter what color the light signal is; no one is moving. Here I begin my search for a driver to take me 15-minutes west to a weekly tutoring job in a private home.

There are two types of taxis available for hire. The first type is a “real” taxi driver. Real taxi drivers are registered with the government. Fares are based on time and distance, so the cab fee is whatever the taxi meter displays. 15 RMB is 15 RMB. 50 RMB is 50 RMB. No haggling required, so a real taxi will probably charge a fair price (I say probably because there are dishonest registered cabbies that have ways of ripping people off). Because payment is straight-forward and relatively hassle free, I much prefer a licensed taxi.

Sometimes, such as during rush-hour, real taxis are in short supply. A second or only option is to hire a “black” taxi. Black taxis are not registered with the government so their inflated fees are up for negotiation. Fare haggling can be a pain, so this process must be approached while 1) not in desperation, 2) with humor, and 3) a clear idea of how much is a fair price.

A typical negotiation goes like this. I walk to the intersection where several drivers stand around yelling “你去哪儿?!” (“Where are you going?!!”) I used to avoid them and take my chances trying to find a real taxi. After a few evenings of getting repeatedly rejected by taxis  that are reserved or don’t want to make a U-turn in traffic, I gave up on real taxis. Instead, I beeline to the crowd of black cab drivers and confidently say in my best Beijing accent, “我去什么什么园。多儿钱？” (“I am going to such-and-such place. How much does it cost?”)

Now, as far as I can tell, these drivers don’t have much going on standing on the street corner yelling at unresponsive passersby. I would think they would be eager to give a willing passenger a ride for a decent price. But no, this wouldn’t be China if there wasn’t a lot of yelling, pleading, cajoling and mild insulting.

Usually, the price starts out at 30 to 40 RMB. Based on the real taxi fare, I reply with 20 RMB. The driver then will respond waving his hands at me indicating that 20 RMB is too cheap. After all, look at all that traffic. His cab is air-conditioned. 30 RMB is the cheapest he can do. Furthermore, I am American so I must be rich. 30 RMB is no big deal.

Sorry buddy, 20 RMB is the fair price.  I often take taxis and I always pay 20 RMB. If you don’t accept this price, I will just ask somebody else.

Next thing I know, I am midst of three or four cab drivers negotiating with each other. I keep piping up, “20 RMB!” Eventually, one will relent and agree to 20 RMB. The others will laugh and tell him how ridiculous that he would accept 20 RMB. Then I jump in the cabbie’s car and remind him not to trick me (“别骗我!”) and take me straight to my destination (“我要直达去那儿!”).

After assuring me we will leave soon, the cabbie will then shut the door. Trapped inside, I am left with my irritation and wondering how long until I reach my destination. Meanwhile, he stands outside and cajoles another passenger into his car. Now the cabbie has two passengers and can make twice the profit in one trip. Inevitably, my destination is farther than that of the other passenger, so I  take a detour to my drop-off. My 15 minute ride (if we were taking a direct route) turns into 30 minutes.

Once stuck in the car, there isn't much I can do except view this extended ride as a good opportunity to practice Chinese and get exposed to other Chinese accents. Cabbies usually like to chat and ask all kinds of questions—some of which I would prefer not answering: “How much money do you make? How much money did you make in America? How much do you pay in rent? Why don’t you have children?” Sometimes they like to give advice: “You should make more money. You could work more and then you can make more money.” Most of the time it takes me a while to understand cabbie chit-chat: “If you were looking for a boyfriend, would you want a Chinese boyfriend?” (Or something like that. Not really sure.). Sometimes I clearly understand the cabbie and I wish I didn’t: “I like you. Can you give me a hug?” (Only happened once and I emphatically replied with, “Don’t want!” as I quickly jumped out of the car).

Several times over the summer, I came across a youngish driver named Wang Guang. He always agreed to 20 rmb and never picked up additional passengers. Over time, we developed guanxi. Guanxi (关系) literally means “relation” or “relationship.” In the context of China, having guanxi with someone does not mean romance; rather, guanxi can mean friendship, connection, or understanding. Wang Guang knows my price and he knows not to smoke around me. Lately, I have been teaching him a little bit of English and he has been telling me how to say car brands in Chinese. He really wants to see some American money, so I might give him a US Dollar as a gift. Then we really will have guanxi.

I suppose going through so many black taxis paid off. Wang Guang is only a phone call away. My ride takes 15 minutes. No haggling. No waiting. And best of all, no chance of running into Hugging Cabbie again.

Hot in the City 闷热 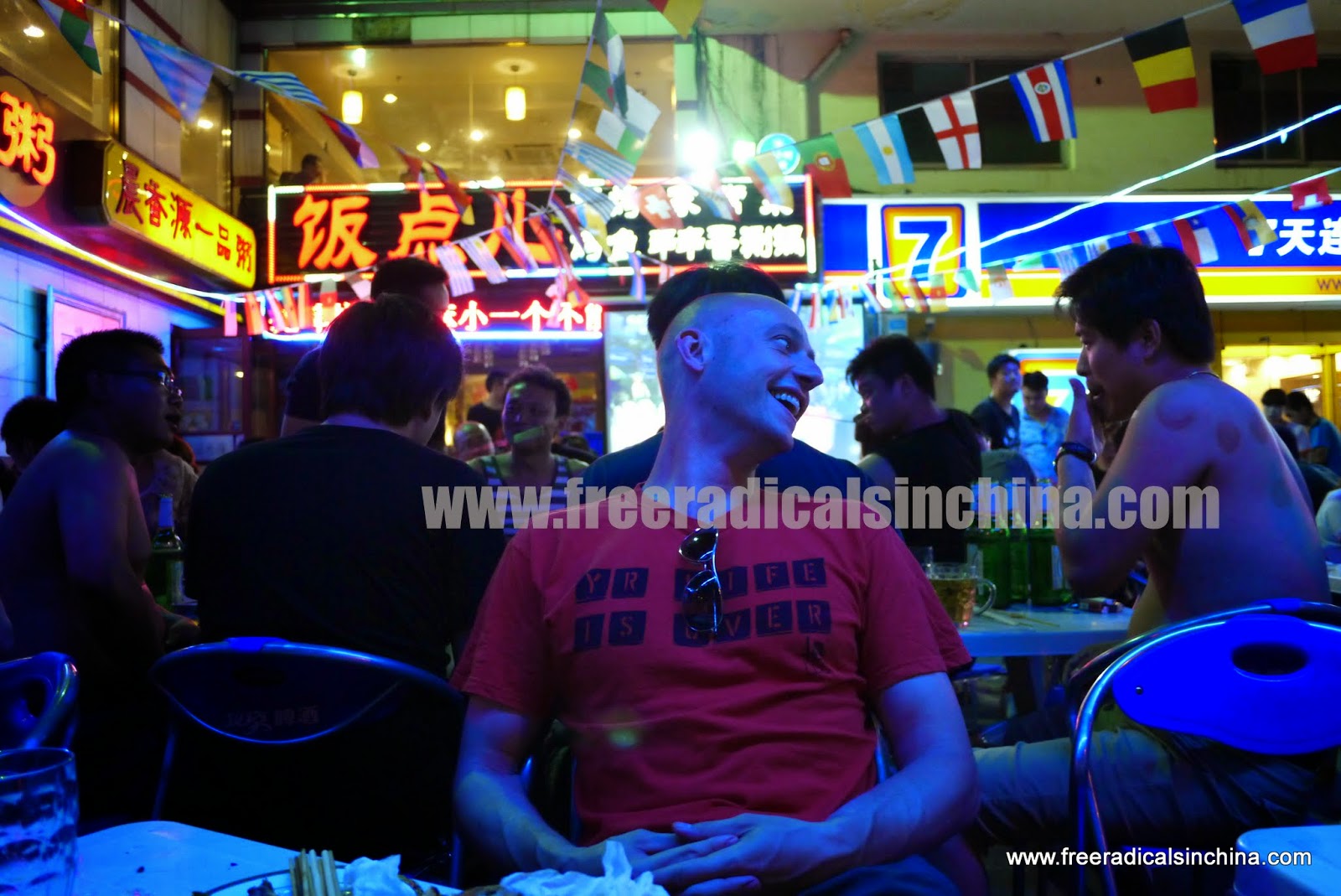 Year after year, summer after summer, I grew up with the same familiar living room scene. The oak trees hedging the house had yet to reach maturity, so the summer sun would blaze through the floor to ceiling windows, bringing the inside temperature to an uncomfortable toasty. Below the ceiling fans and the over-worked air conditioner, my dad would relax in his lounge chair watching CNN and drinking diet root beer. He wore only two things: his navy blue shorts and headphones.

I have been having flashbacks of my dad’s round, bare belly. Why? Because when it’s hot in this city, Chinese bellies appear. The bellies come in all shapes, sizes, and ages. Some bellies resemble Buddha’s firm rotundness. Some bellies long and thin like a green bean. Men eating dinner, watching mahjong games, watching their baby grandchildren, sitting around shooting the breeze—all with their shirts tucked up exposing their brown midriffs. At the same time, one hand gingerly rubbing around the belly button.

Westerners, like us, chuckle at this fashion faux pas. But to the Chinese, airing out one’s midriff is as sensible as turning on the AC. Despite having studied abroad in the U.S., desperately wanting to leave China, and having a Frappuccino addiction, our very Westernized Chinese friend responded to our snickering with this unamused piece of logic: “They do that because it’s hot.” Right, it’s hot. Let it all hang out. Beijing, after all, is sweltering.

Now a week into the September, the daytime temperatures are bearable. As summer wanes so should the belly exposure. But I will always think fondly of my dad sitting in front of the TV, remote in one hand, a cup of diet root beer in the other, and his Chinese, hairless chest and belly in plain sight. Thank goodness manners are cultural, and not genetic. He always wore a shirt when my friends came over. That would have been so embarrassing. 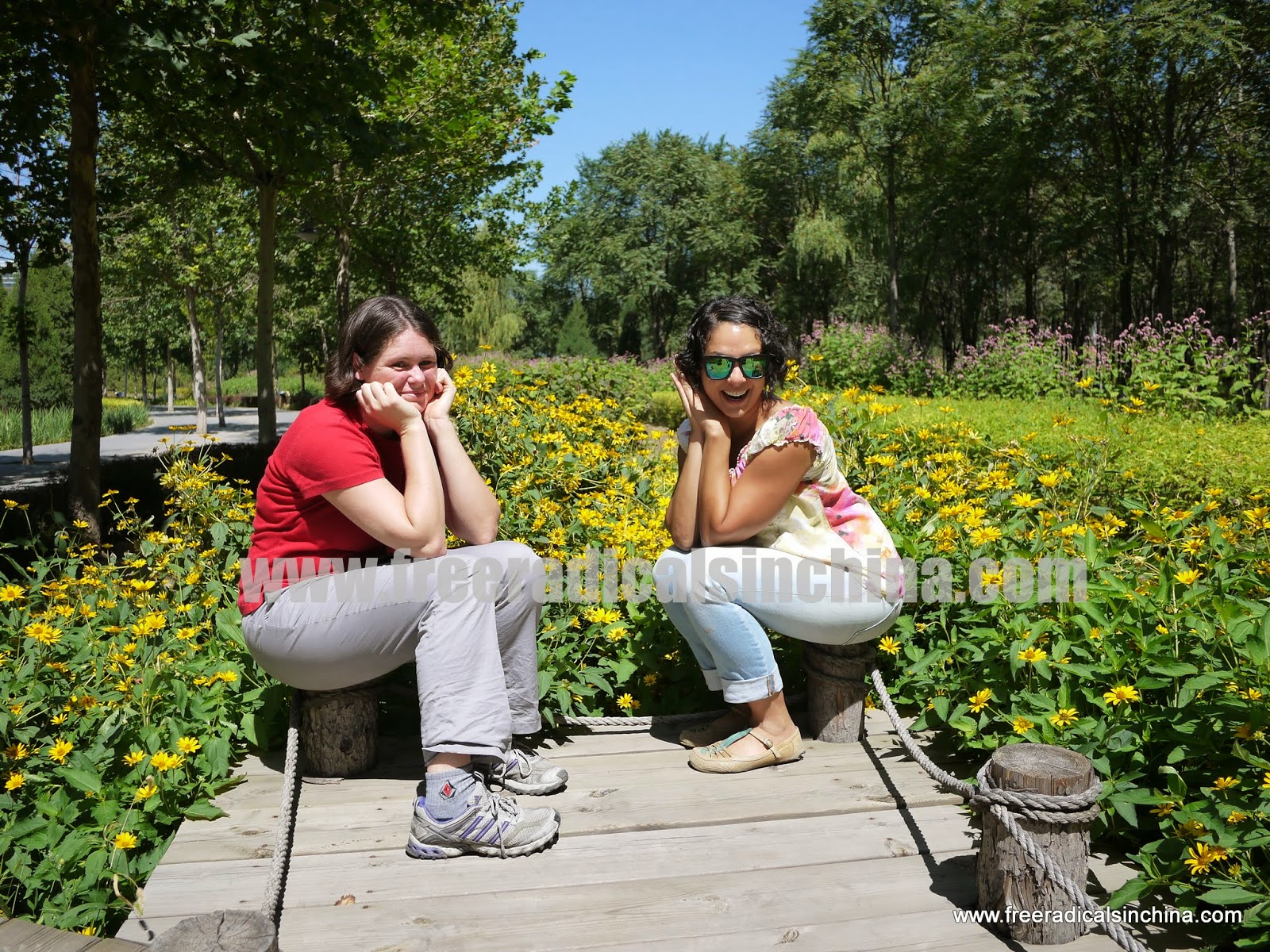 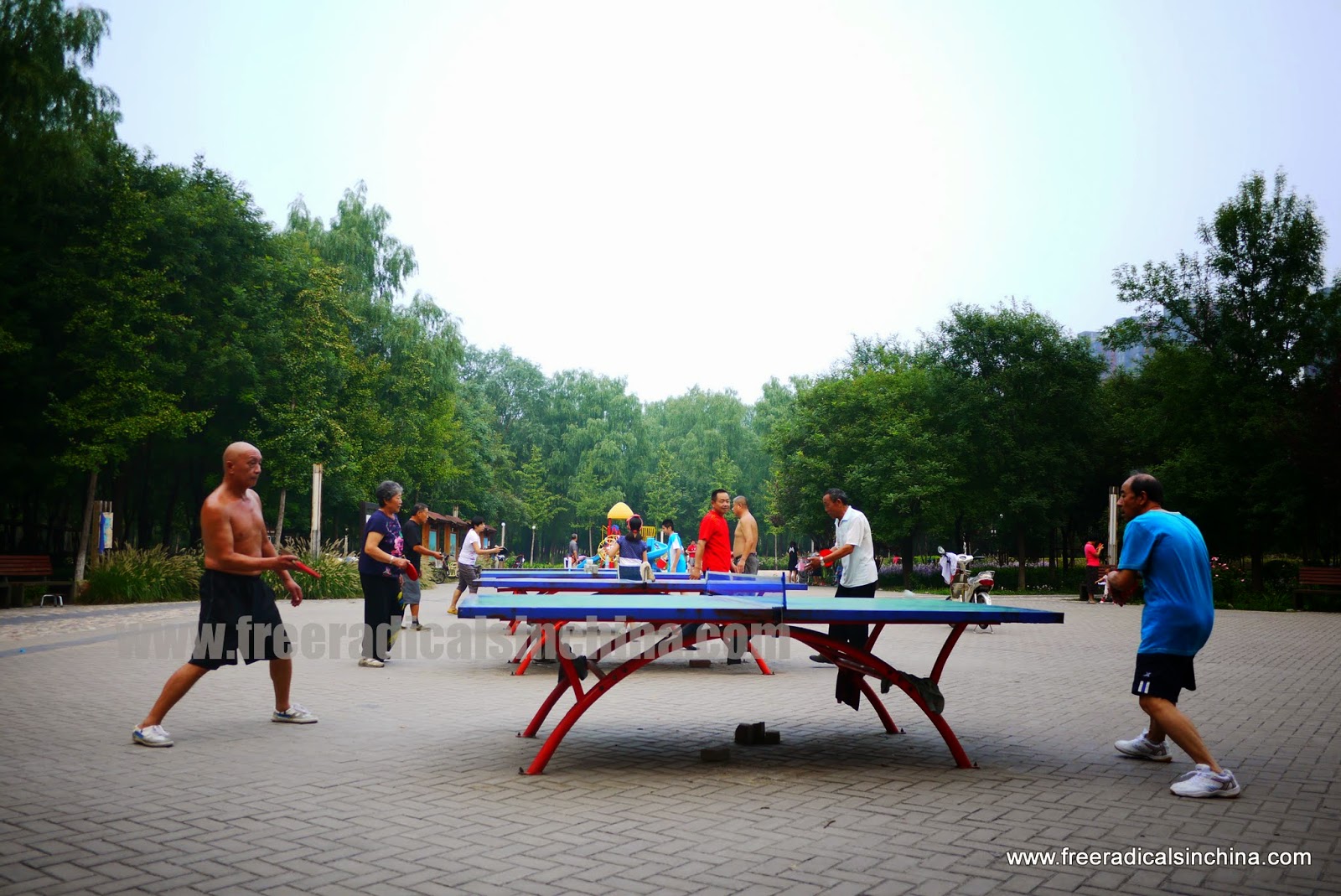