Race For The Prize 寻宝游戏


Spring is sprung! And a sprung spring coincides with Qing Ming Jie, or Tomb Sweeping Festival. As with every national holiday, the skies were clear of smog, dust, or even a cloud. Why? A few days before the festival weekend, moderate showers doused Beijing with its glorious cleansing powers. Xialian is convinced that such auspicious rain is the work of the government, which has invested heavily in cloud seeding technology. Cloud seeding involves shooting chemicals into existing clouds, concentrating moisture and causing rain. If China does control the weather, I would like to say: Thank you, China.

Anticipating nice weather for the holiday weekend, I organized a group outing complete with an activity and potluck lunch. I texted my local friends (Chinese and foreign) to meet at Olympic Forest Park for a super fun game called 寻宝游戏 (treasure hunt). Nobody had ever heard of such a game and wondered what it could be. Ok, anticipation raised. Will I pull it off? What kind of treasures could we find at a Chinese public park? Chopsticks? Flowers? Dogs? Chicken feet snack? I took some wild guesses and produced a list of 50 items for participants to find within a one hour time limit. 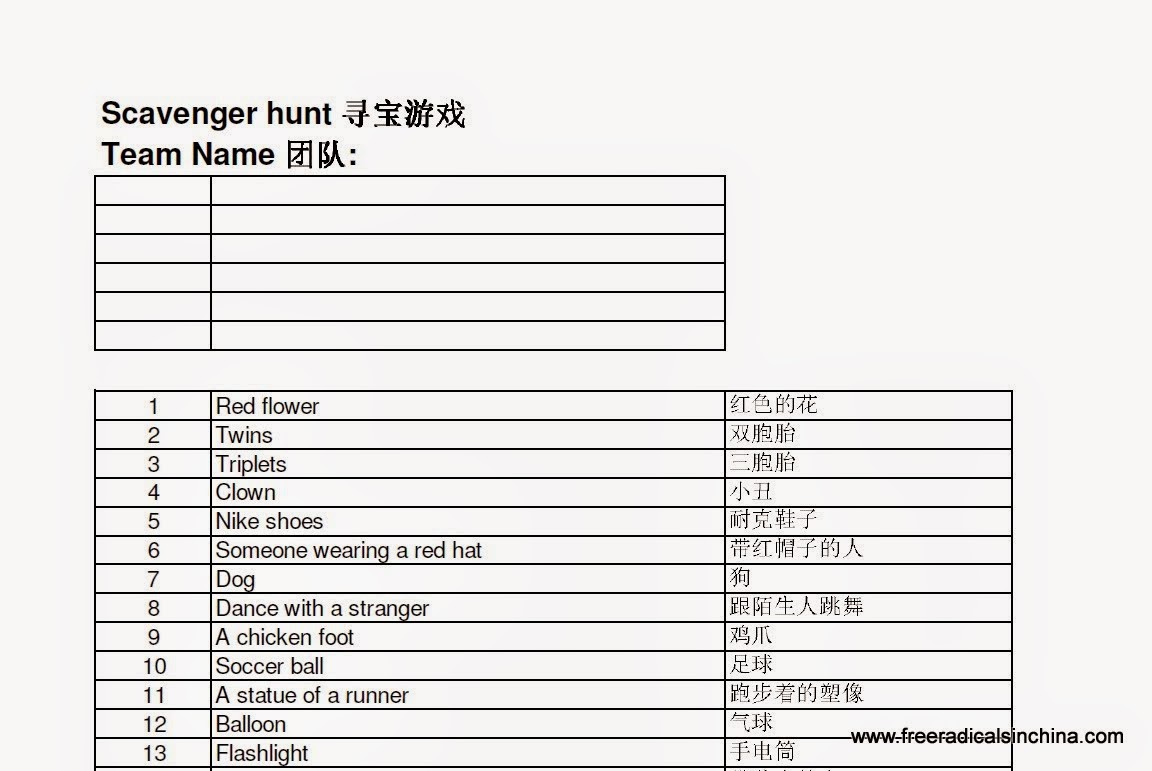 Over thirty of us gathered at the park. We were from America, Australia, Italy, Japan, Korea, and of course, China. We spanned generations, ranging from 8 to 80 years old. Nine teams composed of three to four people raced around the park seeking the mundane (dogs and runners), the elusive (triplets), and doing the embarrassing (dancing and singing with strangers).

I am happy to say the game was a hit! The teams came back excited, out of breath, and eager to share their results. The winning team found 38 out of 50 items, and I rewarded them with packages of gummy bears brought from the USA. They, of course, generously shared the sweets with everyone.

Then we enjoyed the mild sunshine and mild temperatures while spooning (or chopsticking) food into one another's bowls. My Chinese aunties filled my bowl with home-made fried rice and fish, cucumber, and tea eggs. My Japanese bestie supplied sushi rolls (so deee-lish). Xialian kept us healthy with a healthy banana bread. I made an unhealthy apple cake loaded with sugar and coconut oil. The kids jabbered about how many bearded men they found (also on the list).

That evening, one mother sent me this text:

谢谢您! 今天我们玩得非常开心！孩子回家路上一直给我讲他们寻宝的过程，充满智慧！
(Thank you! Today’s game was so fun and happy! On the way home, my son couldn’t stop talking about what happened during the game. So much wisdom!)

My goal was for us to have fun. Mission accomplished.