I'll taste the sky and feel alive again
And I'll forget the world that I knew
But I swear I won't forget you
Oh if my voice could reach back through the past
I'd whisper in your ear,
"Oh darling I wish you were here"
- Owl City 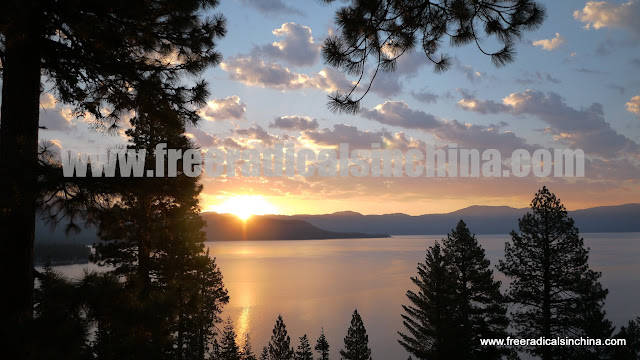 After three consecutive summers, Lake Tahoe has become a family tradition. The first summer was partly for us -- we had been in China the previous year and a summer retreat got us together without distraction. The second year was for birdMAN’s dad, Baba, who had been diagnosed with cancer earlier that year and a family trip to his favorite place would make good memories. This year’s summer retreat was also for Baba, only he wasn’t with us this time. He passed away last February.

This summer, we stayed in this exact same house as the first Lake Tahoe trip. Let’s call this house Magnificent Beautiful House. The house faces east and sits on a steep mountain slope having a Magnificent Beautiful view of Carnelian Bay. Every morning the sun peaks over the east mountains. The sun, ray by ray, bounces off the lake’s placid blue waters exploding into shimmering golden jewels. Meanwhile, the sky transitions from light shades of coral to a deeper shade, to grey-purple, to gleaming blue. A symphony for the eyes. Magnificent. Beautiful.

Three summers ago, as the family ignored the sun’s wake up call, Baba would sit in the patio spa amid the bubbles and chlorine, and greet the day serenely. He was healthy and youthful at 62-years old, happy that all his children were under one roof. He was happy that his children all loved each other, that they lived happy and healthy lives, relatively free of disturbance or anxiety. True blessings in a world fraught with trouble and uncertainty. Magnificent. Beautiful.

This year, Lake Tahoe was as beautiful as ever, the sky and lake as blue as ever, the air crisp and fresh as ever, everything Magnificent and Beautiful as ever, but Baba’s absence was like black cloud in an otherwise cloudless sky. The large lounging chair in the living room corner was empty. That deep seated lounging chair was after all Baba’s chair. Three summers ago, he had sat in it like the patriarch he was, listening to his kids banter back and forth. This year the chair was empty.

His gentle smile and subtle cocky humor, however, resonated in our memories. We found ourselves saying things like, “Baba would have liked this...This is Baba’s favorite.” Even 9-month old Sabella’s first distinct words were not “Mama” or “Dada,” but “Baba.” Baba would have been thrilled--no, not just thrilled--doubled over with joy with much deserved bragging rights. We also imagine how happy he would be watching his two chubby grand baby girls roll around on the floor clumsily grabbing their plastic toys and 5-year old Milan busy with her art projects.

Yes, this year saw the addition of two baby girls. birdMAN’s family now has a total of three grand-girls, which means a pink blanket, squeaky toy, chew toy, doll, stuffed animal, or book was constantly within arm’s reach. Conversation among birdMAN’s brothers and sisters also changed. Discussion topics were as normal: namely, what sales are at Nordstrom Rack and why Big Bang Theory is the best television show in television history (I vehemently disagree). Now topics included what minivan and car seats have the best security features and how much they cost.


Otherwise, we did what families sharing an awesome house do together: eat a lot of food, tease each other, bounce babies around and just plain catch up. We dined on favorite meals: barbecue cilantro chicken sandwiches, tri-tip and asparagus, chicken marsala with raviolis, tacos loaded with sour cream and avocado. Of course Moomoo brought out a box of See’s chocolates, each chocolate carefully chosen according to each one’s favorite. We also did what vacationers do: lay on the beach and swim, hike, bike ride, and stare at the view. After a year of hard work, a little R&R goes a long way. 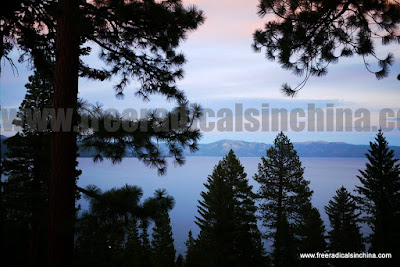