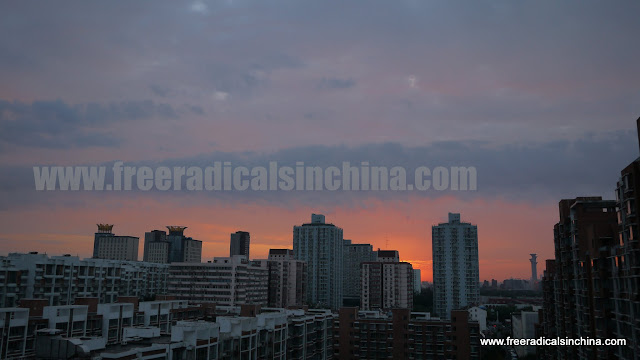 My landlord sent me a text about a month before our rental agreement was up. The text read something like this: "I have found new renters who want to rent for 6,500 RMB. You have lived there for three years, so I will only raise your rent to 6,000 RMB."

We texted back and forth a few times. She made it abundantly clear she would not bargain and she already found renters willing to pay 6,500 RMB. So--being the gullible person I am-- I believed her. People--especially Chinese landlords-- are always honest. Right?

birdMAN and I spent the next three days evaluating our options. Current available rentals were scarce. Apartments were dumpy, expensive and filthy. Cleanliness, I should add, is not a requirement. In China, finding a clean rental is like finding genuine leather in Forever 21.

Just as we were about to accept the rent increase, the real estate agency called. Qingqing, our very excitable real estate agent, was frantic. There was an apartment in our same complex, the same size, and cheaper than 6000 RMB. Within five hours, we had seen the apartment, looked past its filth, saw potential, and paid the first month's rent as a deposit. In the current rental market, apartments get snatched up quick. We had to move fast.

Ok, now she was ready to negotiate? But it was too late. We had sealed the deal. We were moving. Goodbye twelfth floor view of the garden and Olympic Park towers. Hello third floor view of parking lot and gray cement buildings. Goodbye peach and baby blue wall paper (not terribly devastated about that). Hello cigarette smoke stained walls, ceilings, and doors.

Before we knew it, a parade of real estate agents and potential renters came knocking on our door, sometimes unannounced, calling me, texting me: can they come now and look at the apartment? Uh? Didn't the landlord clearly state that she had found renters willing to pay 6,500 RMB?

The landlord had not found renters at all. Furthermore, she posted the apartment rent for 6,000 RMB, not 6,500 RMB. Ohhh what tangled webs...

She straight up, blatantly, unapologetically lied. And I was miffed, not only because she lied, but because I didn't understand the point of the lie. Why didn't she just say that the rent is higher and leave it that? Didn't she know I would find out the truth eventually?

Here we had a collision of cultures. She interacted with me as though I were Chinese. She expected me to know that what she said is not what she meant, and that I should know what she meant. I expected her to be straightforward. You know, I expect her to say what she meant.

After we had packed up and moved out, we met with the landlord one last time to return the keys and get our deposit. I told her we really liked living there and we were sad to go. She said I should have called her. She said (as I understand it), "Chinese people are like that. We like to discuss things. If you called me, we could have talked about it. I really liked renting to the two of you."

So I should have called her instead of communicating through texts. Then maybe we would have negotiated an acceptable rent. Maybe we'd still have our awesome 12th story view and peach and baby blue wall paper.