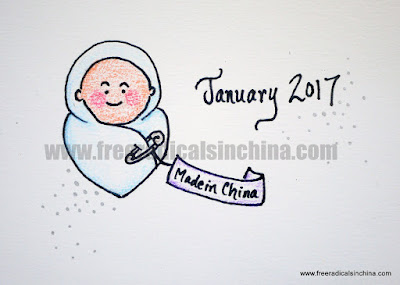 It was a Sunday. As usual, we had checked Great Leap Brewery’s Wechat account for its weekly beer special. That night the Chesty Puller was on special, meaning the normal price of 40 RMB is slashed to 25 RMB. Once again, the Chesty Puller pulled us in to one of our favorite Beijing haunts. Not only is GLB’s beer a welcome, hoppy, happy respite from Tsingdao’s lightly flavored beer water, but GLB’s double cheeseburger dripping with gooey cheese layered with dill pickles counteracts a week’s worth of noodle overload.

Earlier that afternoon, I told birdMAN I probably should take a pregnancy test before libations. Why? Well let’s just say the Big Aunt hadn’t come for a long time (Big Aunt 大姨妈 is slang for a lady’s monthly ya’ know). So we headed to a nearby pharmacy and forked over a whopping 15 RMB (~2 USD) for a home pregnancy kit. I was pretty sure I was imagining things and I would indeed drink a couple Chesty Pullers that night, but the pee testified positive-- there were two visible lines indicating, well, I was pretty sure anyway, the presence of the pregnancy hormone HCG.


I called to birdMAN from the bathroom, “Well, I have some bad news!”

“It’s a no?” birdMAN has wanted to start a family for awhile but let’s just say nature hadn’t been super cooperative.

“I can’t have any beer tonight.”

“Really?” Yes, really, or at least I thought so. The test kit was entirely in Chinese so we spent a few minutes confirming that 阳性 meant positive. No Chesty Puller that night, but at least GLB makes a tasty cheeseburger.

That was about seven weeks ago. Since then, I have had three ultrasounds. The first was to confirm pregnancy and date it. I was only at six weeks. Normally, ultrasounds aren’t done this early, but I really had no idea how long I had been pregnant. The second was to confirm that the little stinker was sticking around. It was. The twelve week ultrasound showed everything normal and good to go. OK, now time to tell people.

Here are some answers to some questions you might want to ask:

So yes, it’s true. Great Leap lost one moderate beer drinker and China is about to a get a little more overpopulated. 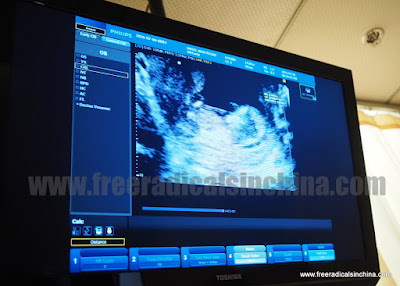