You're The One For Me, Fatty 你变胖了！

You're the One for me, fatty
You're the One I really, really love
And I will stay
Promise you'll say
If I'm in your way
- Morrissey 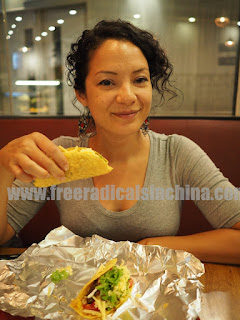 To the average American female reared in the midst of Seventeen magazine and celebrity waifs plastered on every form of media imaginable, weight and body shape can be deeply personal and sensitive. So what does western woman say if a friend has gotten a little rounder? Absolutely nothing. That’s the polite thing to do.

Not so in China. Noticing, after all, is caring. One time, I was out a with friend of mine. This friend is in her mid-fifties and adheres to an old-school way of Chinese thinking (for example, sitting in air-conditioning is like asking for imminent death). I only understand about 50% of what she says through her oily Hunan accent. But I 100% understood her say, “You’ve gotten fat!” to her neighbor whom we chanced upon.

The neighbor did not flinch. She in fact agreed. Yes, she had gotten fat. The pharmacy nearby happened to have a scale set right outside its open doors. What a perfect opportunity for the two old friends to compare weights. Never mind that one was about a foot taller than the other. I was glad they did not insist on weighing me. (Which by the way happened once. A shoe seller wanted to compare our weights so broke out the scale. Never mind that I was about a foot taller than her.)

Over the previous four years spent in China, “You’ve gotten fat!” has rarely been directed at me--until now. Well, I am pregnant. Of course, I am gaining weight.

I spent about a month during the summer in California. Over the course of the month, I went from 3 months to 4 months pregnant. When I came back to China, my thicker middle did not go unnoticed by the fruit and veggie lady, the nail lady, or the handful of friends who didn’t hear the news through the grapevine. So what did they say? “You’ve gotten fat!” After all, noticing is caring.

Well, fortunate for me, I had a good reason, so their comments didn’t sting so bad. I admit, I did eat my fair share of In n’ Out cheeseburgers and Chipotle burritos, but my expanded waste line was not necessarily due to overindulgence. I mean, seriously! I am growing a human.The first few times I heard “You’ve gotten fat!”, I would simply smile and say I was pregnant and then wait for the excited reaction followed by the inevitable unsolicited advice.

Then I got annoyed at that detestable sentence: “You’ve gotten fat.” Soon I found myself just nodding my head in agreement and letting it be. Eventually, they’ll figure out why I have become such a fatty. Now more than halfway through my pregnancy, I am beginning to look more pregnant than just plain fat. Even so, I still hear that detestable sentence, “You’ve gotten fat!” along with “You’re so big! You must be having twins,” or “Wow! You’re so big for six months. You should eat healthier food.”

Westerners tell other pregnant women, “What a cute baby bump!”, “You look great pregnant!” or “How wonderful the baby is growing.” That’s what people should say to pregnant women. Pregnancy means getting bigger, and that is a good thing. A human is growing en utero. A growing baby is a healthy baby. Telling a pregnant person she is getting fat or that she is so big she must be carrying twins makes no sense. And its hurtful.

Seems like every day someone tells me that I am big/fat or asks if I am having twins. I began to wonder if perhaps telling a pregnant woman she’s big is actually a compliment. I asked my world-cultured Chinese friend if I should feel complimented. Nope. Noticing is caring.

So I have to turn off my American sensitivities and take the comments in stride like the rest of my Chinese friends. I have to assume that my Chinese friends grew up hearing their family and friends throwing around “You’ve gotten fat” like talking about the weather. To them, such topics are no big deal.

So for now, just call me what I am-- a fatty (aka pregnant).