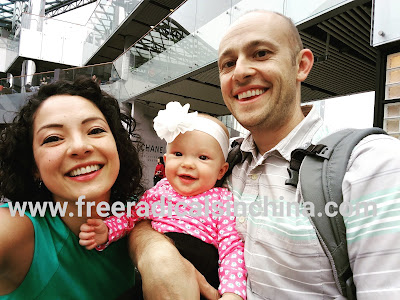 Sixteen years ago, we got married. We were two very young people barely into our twenties. Our greatest worries were acing our college midterms. Wingless chicken wings and Midori sours at Chili’s were our idea of tasteful, casual dining. We regularly went to bed long after midnight (by choice!). Reaching the sunset of our thirties was far from our minds, let alone setting up house overseas and birthing a child there.

Sixteen years of marriage later, we are the happiest we have ever been. To make ourselves even happier on our very special wedding anniversary, we worked around Dumpling’s semi-predictable nap schedule and jetted over to Sanlitun for some make-us-happy eating.

Ah Sanlitun: Beijing’s non-Chinese food mecca....Here you can get a health fix on kale smoothies at Wagas, sink your teeth into legit fish tacos and guacamole at Taco Bar, or risk serious garlic breath aftermath on hummus at Biteapitta (so worth it). We forwent our usual casual dining and opted for a fancier fare at Bottega. Fancy fare for us is simply a single candle on the table. No tablecloths or servers clad in penguin suits required.

Because we worked around Dumpling’s nap and early bedtime, we arrived at Bottega at 4:30 pm. With no other customer in the joint, we got three attentive servers to ourselves. One of the server’s captivated Dumpling with his generous smiles for about ten minutes. Thanks for the distraction, Mr. Server.

We sat on Bottega’s slender patio and under Beijing’s dull gray sky. Here we enjoyed the some of the best weather that Beijing has to offer during the year. Unfortunately, these pleasant temperatures are transient. Beijing, after all, only has two seasons: a long, muggy, and gray summer and a long, cold, and dry winter. Fall and spring seem to last a couple weeks each. Before we know it, we’ll be layering on the sweaters, scarves, and down coats.


Oohh…let's not think about winter. For now, on our 16 year wedding anniversary, let's eat! Bottega has a nice selection of Neapolitan style pizzas, none of them faintly resembling China Pizza Hut’s oddball fried shrimp and canned peaches pizzas. We opted for the kale and sausage pizza with red sauce and the house made vegetarian raviolis topped with pesto and pine nuts. birdMAN was a little hesitant about ordering the vegetarian raviolis, but my-oh-my! Those raviolis stuffed with eggplant, carrot, and zucchini and bathed in a decadently creamy sauce made our hearts sing. The pizza, while generously oozing with mozzarella cheese and packed with flavor, was a little moist perhaps due to the cooked kale. A bottle of Italian red wine rounded out the fare and jacked up the dinner bill.

Dumpling, our little foodie in training, made our 16th year one of the best. This year we got our own little human! And she likes food as much as we do.

Sixteen years later, we are a family of three. Our greatest worries include making sure Dumpling gets her nap and in bed on time. Thin crust pizza and a bottle of wine is our idea of fine dining. We regularly go to bed at ten pm (by choice!) Reaching the sunset of our fifties…Come on now. That's still really, really far away!

Happy sixteen years to us. I love you both, birdMAN and my darling Dumpling.