It’s been a hot long summer
I miss you, it’s a bummer, yeah
We both travelin’
You’re somewhere south of Wichita
I’m up here somewhere under the moon
I can’t see you
- The Flaming Lips and Miley Cyrus 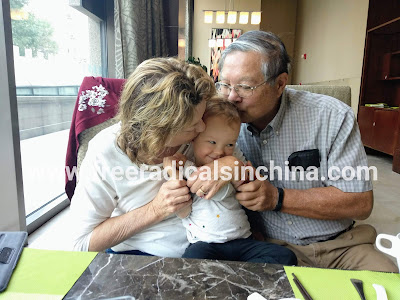 This past October, my parents traveled 5,892 miles from Sacramento, California to busy Beijing, China. They came not to see ancient China’s cultural treasures like the Great Wall or Forbidden City. Nor did they come to witness firsthand China’s rapid development like Beijing’s very impressive, efficient, and ever expanding subway network. Neither did they come to visit me, their second born daughter (that they love so much). They came for the same reason that Chinese grandparents drop everything and move into their kids’ house for a really long time. They came to see their one and only granddaughter, Dumpling.

Every minute they languished on that cramped overseas flight was worth every minute spent with Dumpling. Our little chatterbox greeted them every day with a very exuberant, “Pop-pop! Yaya!” She thrilled them with her new skills like hopping and putting on other people’s shoes. She pointed out colors as if Yaya and Pop-pop couldn’t distinguish green from red. She inherited Yaya’s love of french fries and Pop-pop’s love of weird Chinese food like preserved duck egg and bitter melon soup.

Unlike Chinese grandparents who are happy to camp out in the living room, my parents chose to forgo free accommodations and live it up at the nearby and very posh Holiday Inn. That’s right, the posh Holiday Inn. Beijing’s four-star international Holiday Inn boasts a palatial reception area, indoor lap pool, and a breakfast buffet to boot.

Nearly every morning, Dumpling and I joined Yaya and Pop-pop for stuff-your-face-until-you-can’t-move breakfast buffet. Pop-pop savored more than his fair share of jook (Cantonese for rice porridge) topped with salted duck egg and salt-preserved veggies. I opted for the house-made wonton soup and cross cut french fries. Yaya was all about the hash brown patty and watermelon. Dumpling’s hands down favorite was the yogurt. Seriously, Dumpling could win the toddler version of a yogurt eating contest.

In addition to the hotel buffet, China’s capital has plenty to offer to the culinary savant. After all, eating local fare is an important way to experience different cultures. From Peking roast duck to Xinjiang’s barbecued lamb to Cuandixia’s mountain village steamed fish, the parents got just a taste of China’s various cuisines. Our food tour ended at the newly opened and kid-friendly Boxing Cat Brewing for western food that I can’t prepare at home (like rotisserie chicken and beer). Thinking of that rotisserie chicken just makes my mouth water. Dumpling was so excited to see french fries, she cried “fench f-eye!” for the first time. Then she ate waaayyy more french fries than her fair share.

But Yaya and Pop-pop didn’t have to eat restaurant food everyday. They did get a couple home-cooked meals, one of which included my homemade pita bread. As I told Pop-pop, pita bread has yet to infiltrate local bakeries, so until that happens--I must make my own.

Fortunately, jet lagged grandparents and Dumpling’s sightseeing pace and sleeping schedule are the same. We took it easy, enjoying October’s mild temperatures and blue skies. We didn’t make it over to the Forbidden City, but we hit a couple hot spots like the Bird’s Nest at Olympic Park and 798 Art District. We took one day trip to Cuandixia, a folk tourist village about two and half hour’s drive away. We usually spent the afternoons in the hotel where both grandparents and Dumpling got an afternoon snooze and I snacked on the Yaya’s stash of Big Hunk, Look!, and Almond Joy candy bars.


Pop-pop had done his research and had a few things on his while-in-Beijing bucket list. Unfortunately, eating scorpions in Wangfujing didn’t make the cut, but attending Peking opera did.

After eliciting my Chinese friend’s help and navigating a nearby opera house’s website, I successfully purchased three tickets for 200 RMB ($30) each. Dumpling and birdMAN stayed home and went to bed while my parents and I could have a night out on the town.

So what did I think of my first ever Peking opera? Costumes were gorgeous. How the singers get their voices to such exponential shrillness is a mind-boggling. But after two hours of “EEEEEEEE---eeee--AAAA---aaahhhhhhh!!!!”, my ears were bleeding from the inside. Honestly, eating scorpions is much more endurable and enjoyable than that screeching cacophony. Maybe Peking opera is like blue cheese or stinky tofu. You just have to develop a taste for it.


Before we knew it, Yaya and Pop-pop’s eight days in Beijing came to an end. They packed up all their loot including a few hand painted ink drawings, postcards, salted dried fish, bamboo cutting boards and various snacks. The morning of their departure, we ate our last stuff-your-face-until-you-can’t-move breakfast buffet, Dumpling ate her final Holiday Inn yogurt, and Yaya took Dumpling for final dip in the pool. Dumpling and I said our final goodbyes. .

So nice that Yaya and Pop-pop came 5,892 miles to see us. And double nice that they left us a stash of Almond Joys as reminder of their visit. But the stash has now dwindled...so they better come back real soon.