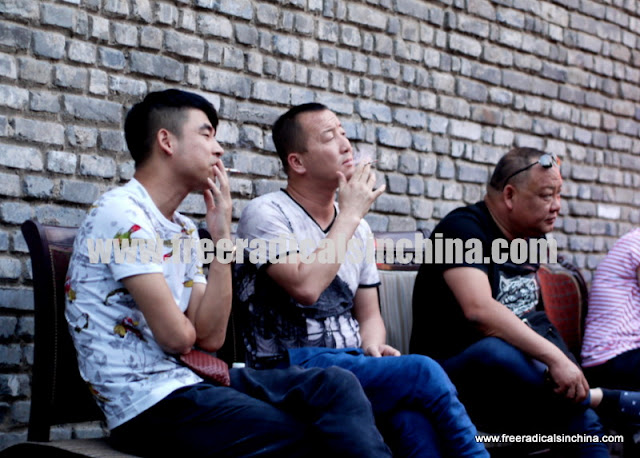 Take a breath. Ooohh, maybe I shouldn’t...the kitchen is getting smoky. And it’s not because someone burnt the toast. Someone-- or someones-- is smoking.

Just as no man is an island, no apartment in the Great Smoking Dragon (aka China) is a vacuum. Muffled voices reverberating through the walls and echoing up through the drain pipes. Babies crying. Pianos playing. Electric drills drilling. Toilets flushing. Loogies hacking. Fish and hot peppers frying. Rice cooking or incense burning. Sounds and odors--good or bad, poisonous or innocuous-- waft through the cracks, the crevices, the pipes, and the vents that connect our side-by-side, top-by-bottom homes.

As for the cigarette smoke, I suspect that the smoking son-of-a-gun is our black-gummed neighbor that lives directly below us. Maybe he smokes in the kitchen and turns on the kitchen vent to mitigate secondhand smoke effects on his two young children. Or perhaps he lights up in the bathroom before he brushes his teeth (Question: does he brush his teeth?). In any case, I’m not just blowing smoke. Every evening and most mornings, my home is going up in smoke.

Even if our home were a smoke-free sanctuary, avoiding cigarette smoke on a daily basis would be impossible. China is the biggest consumer and producer of cigarettes in the world. About 350 million of the 1.3 billion Chinese habitually light up [1]. That’s roughly one in four persons. No escaping the food delivery guys scanning their cell phones with one hand and a cigarette in the other. Or the grandpa shuffling along the sidewalk completely oblivious to the effect of smoke on his young grandbaby. Even in restaurants, in which smoking is supposedly prohibited, smokers can still light up in private dining rooms. The smoke, uninvited and knowing no boundaries, drifts to the public eating area mixing with the smells of garlic, seared meat, and rice.

Back in 2015, we non-smokers rejoiced and optimistically hoped that Beijing’s public smoking ban wasn’t just smoke and mirrors. Hitting up the 15 RMB burrito special at a nearby western restaurant no longer meant inhaling fellow patron’s carcinogenic fumes. But it took awhile for smokers to accept that smoking was no longer accepted. The day after the ban went into effect, I saw a brawny baldy (think Mr. Clean but without the pearly whites) abandon his martini and plates of uneaten food in a puff (of smoke) when he was told he couldn’t smoke inside. At a Chinese restaurant, our pleas for fellow patrons to abstain from smoking fell on deaf ears. Meanwhile, the boss juggled money and beer with a cigarette cinched between his lips.

Now more than three years since the ban went into effect, smoking inside restaurants is noticeably reduced. Every once in while, if someone does light up inside a restaurant, I am not shy about telling the rogue to go outside. There’s children here! And holy smokes, the offender is usually pleasantly compliant.

So...is the Great Smoking Dragon about ready to bid smoking zai jian? After all, even President Xi Jinping kicked the habit [2]. Ehhh, maybe, but certainly not for a long time. Smoking isn’t a exactly an habit easy to give up, and smoking culture is pervasive. The majority of China is yet unaffected by anti-smoking policies. Currently, only four cities in all of China enforce strict smoking bans. These cities are Beijing, Shanghai, Shenzhen, and Xian [3]. While 2015 and 2016 saw decreases in tobacco sales for the first time since 2000, 2017 and 2018 saw increases over the previous years, likely the result of the tobacco industry’s push back against anti-smoking policies [4]. The Great Smoking Dragon won’t go down without a fight.

So as I close the kitchen door, a futile attempt to confine the smoke, I ponder what smells travel from us to our neighbors. Chocolate chip cookies baking. Banana and pumpkin breads laced with cinnamon. Italian garlic chicken. Indian butter chicken. Spicy pork carnitas. The smells we send up the pipes should make stomachs growl, not recoil in disgust. And certainly, the smells emanating from us do not increase risk of developing cancer.

You can stick that in your pipe and smoke it.