More the six years ago as a China newbie and curious about local fare, I bought some cut-up pieces of durian fruit at a large outdoor market. Thorny, oblong and pungently fragrant fruits piled at various produce stands intrigued me. What was this weird fruit? So I took my little Styrofoam container of cut-up durian--it kind of looked like alien poop--back to the office that I shared with birdMAN and other expat teachers. Everyone took a whiff of the durian’s stench and chewed me out for stinking up the office. Then I tasted it. Oh the regret! It tasted like rotten mangoes laced with onion and gasoline. No wonder this malodorous abomination is banned from entering Singapore’s subways. The aftertaste lingered long after we opened up the windows to air out the miasma. This so-called king of fruit in no way won my loyalty.

This winter, we vacationed in balmy Malaysia where durian reigns. If you have never enjoyed experienced eating or smelling durian, here are some descriptions that I found perusing the internet:
birdMAN, Dumpling, Xialian, and I came to Malaysia, not to eat durian, but to see good friends Qen and Momo. After suddenly leaving Beijing due to injury, and spending some time recovering and working in Japan, they landed in a small town in east Malaysia. And wow! Life here is light years from Beijing. Here they drive an all terrain vehicle (to navigate muddy roads), are learning the local language, Iban, survive without a pizza or beer joint anywhere in the vicinity, and have become durian aficionados.


The first day on our arrival, Momo touted a bag of those offensively stinky and thorny stink bombs back from the market. Out of consideration for our durian unaccustomed noses, she placed the durian outside until snack time.

Preparing durian for eating requires muscles and the right equipment. Clearly no amateur, Momo slipped her left hand into a thick, protective glove. With her other hand, she wielded a large knife as shrewd as a bear prying open a beehive. That beast did yield, its prickly exoskeleton split into two defeated halves. She scooped out its buttery flesh, smooth like warm cheesecake and reeking like gasoline-laced, long overripe mangoes. 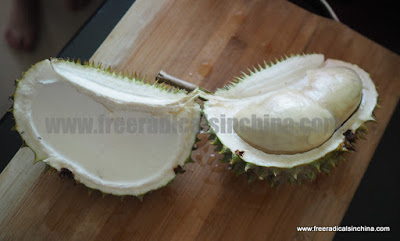 Before long, Xialian and I faced off over a plate of durian. Kidney shaped pods glistened smooth like pale-yellow earthworms. The funk enveloped us like Agent Orange. Here goes nothing...I bit into its custardy flesh. It tasted like gooey mangoes...like caramel liquor...like gasoline...like onions with a hint of tropical Starburst candy. Describing the taste of durian is like trying to describe a full-bodied complex wine without ever having tried wine before or familiar with how it's made. Impossible.

This time durian went down much smoother than the first time six years ago. I even had a second helping immediately and more the next day. Xialian, on the other hand, is now a loyal subject to King Durian, craving durian flavored snacks and drinks (durian coffee an abomination!). She even prefers durian over soursop, a magically refreshing white fleshed fruit that tastes of sour apple and banana. birdMAN was a bit ho-hum about durian. Dumpling threw her serving on the floor and promptly ran after the very gentle (and tolerant) kitty, Torazo.

Why durian is so tremendously loved is quite a conundrum for many Westerners. Why do people eat something that smells like rotting garbage? They eat it for the same reason that Westerners eat blue cheese. Blue cheese smells like dirty gym socks that have been festering in a locker room for months. Like durian, however, blue cheese is creamy, decadent, layered with complex pungency that inspires both adulation and repulsion. You can't explain why you eat either blue cheese or durian. You just have to eat them and learn to love them. Both are an acquired taste.

Finally after all these years, and several trips to southeast Asia where durian reigns, the king and I have made peace. The stink emanating from the durian’s custardy flesh now seems more tropical than toxic. Perhaps I’ve gotten used to the smell. Perhaps I even enjoy its putrid stink. While I may not be a loyal, die-hard subject of King Durian, I do bow in respect.