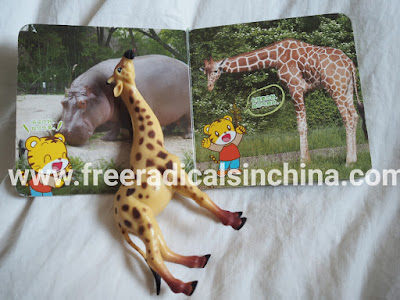 After six and half years of living in China, you would think I got this language thing down. Speaking Chinese should slide off my tongue like water off a duck’s back. Sigh...just wishful thinking. I frequently mix up characters and struggle with tones. Is it 空天 (means empty sky) or 天空 (means sky)？And what tone is 空?

Dumpling, on the other hand, after two years on the planet, seems to be mastering language duality with ease. What’s the formula for raising this bilingual toddler? Dumpling hears Chinese daily, interacts with Chinese people and children daily, hears me read (poorly) in Chinese to her daily, and occasionally watches Chinese cartoons. Her young brain is a dry sponge soaking up everything she sees and hears.

She has yet to form a complete sentence, but whether she says “fish” or “鱼”, “ball” or “求”, or “cookie” or “饼干”depends on who is around. Last weekend, she grabbed a toy fish and presented it to one her Chinese aunties screeching with gusto, “鱼!” When she saw a picture of a giraffe on another baby’s water bottle, she said the ---not one, not two, but the three character long word--- for the long necked deer, “长颈鹿.” (literally, changjinglu means “long neck deer). I’m no expert, but I am pretty sure her tones are pretty spot on.

As far as I can tell, these words include but are not limited to:
Everyday her speech is getting more and more clear. She’s using adjectives to describe objects (“green car”), and possessive nouns (“mommy shoes” and “Dumpling coat”). She responds to the question,“你叫是什么名字?” (What’s your name) with her Chinese name, “紫依” (Ziyi). Her response to directives is getting faster and faster. Watching Dumpling develop her language skills is downright thrilling.

birdMAN and I will never, ever, ever, ever, be fluent in Chinese. We can only hope for some competency. If we stick it out in China, however, Dumpling will become our personal translator. Now, that prospect is thrilling.