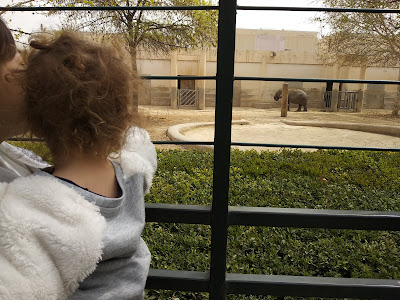 On the playground or in the park, I sometimes bring the Beijing Zoo up as a conversation topic. Have you been to the zoo? How is it? Most people respond, “还行 (háixíng)”, which can be translated as “okay”, or “passable”. Háixíng is the ultimate non-answer. 还行 could mean: 1) the person doesn’t like it but not enough to say, “不好 (bùhǎo)” (bad), 2) has no opinion, or 3) likes it but not enough to say, “挺好 (tǐnghǎo）” (really good). Tripadvisor, by comparison, rated the Beijing Zoo with 3.5 out of 5 points. I would say that too is háixíng.

As Qing Ming Jie (Tomb Sweeping Day) approached, we contemplated how we should spend birdMAN’s day off. As tempting as it was to jet over to our favorite cheeseburger and beer joint, Great Leap Brewing, we ultimately accepted a friend’s invitation for a zoo outing. Who needs beer when you can rub elbows with (or get smashed among) loads of strangers vying for a glimpse of a lion or a space to take a selfie in front of a resplendently blooming cherry tree?

So on the morning of Friday, April 5, birdMAN and I-- with Dumpling, chicken sushi rolls (prepared by yours truly), and a load of snacks in tow-- made a 45 minute bike ride south to the Beijing Zoo. There we met up a group of friends who, like us, had accepted the same invitation to spend the holiday getting down with caged wildlife and hoards of strangers.

The Beijing Zoo is spacious, boasting 220 acres of animal exhibits, rivers and lakes, traditional Chinese style pavilions and gardens, and an aquarium. The crown jewel of the 14,500 animals that call Beijing home is the giant panda. By contrast, the San Diego Zoo, the gold standard of zoos, covers 100 acres and houses 3,500 animals.

Like all public places in China on a Chinese national holiday, the zoo was packed. Everywhere you looked there was somebody along with somebody else, and they all morphed into a pulsing sea of somebodies eating sunflower seeds and Chinese hot dogs (insert gag reflex here). The crowds, the claustrophobic feelings, and the hot dog smells dissipated somewhat as we meandered deeper into the zoo.

Upon entering, we channeled through through an impressive Chinese style courtyard and then to a spacious walkway lined with trees and shops. I thought, “Ah this is nice! What a nice Chinese zoo.” The blue sky, the ambient temperature, and the trees teeming with fluffy pastel blooms dazzled me. The zoo was definitely better than háixíng. In fact, it was entering into the realm of tǐnghǎo (really good).

The monkeys’ cavernous glass enclosure was the first stop on the animal walk about. There were ropes to swing from, plenty of ledges to sit on, loads of carrots and sweet potatoes to snack on, and an adoring audience. Monkeys were happy. I was happy. Tǐnghǎo de.

Not far from the sprightly monkeys roamed the polar bear. Normal zoo animals roam around looking for things to eat while leisurely scratching their bellies. This poor polar bear, however, was far from normal. Fur matted and thinning in spots, he roamed - no, paced - back and forth across the dilapidated concrete expanse with wild eyes. He bobbed his head erratically as though he were locked up in a windowless sanatorium and desperate to escape his friendless prison. This was far from háixíng. This was bùhǎo.

Things really nosedived upon reaching the hippos. True, I am not a hippo expert, but my gut feeling is that a cramped concrete enclosure, a muddy puddle scarcely larger than a hippo, and a dozen or so fists pounding on the glass separating one sort of wild from another, are a hippo's worst nightmare. Another bùhǎo moment.

Other animal exhibits were what you expect for an average zoo--not exactly a wild animal’s dream home, but adequate like a retro tract house. The rhinos, elephants, giraffes, and zebras seemed content enough roaming around dirt enclosures while spectators looked on from an acceptable distance.

The animals were not the only things to see at the zoo, at least not for some Chinese visitors who have never seen foreigners before. One elderly man squatted not five feet from our picnicking group brazenly snapping photos away of our friend, Mr. Italy. Perhaps the shutterbug was enamored by Mr. Italy’s prominent schnoz or his deli sandwich. In any case, three different people from our group told him to knock it off before he finally went on his way.

The three hours we spent wandering around at a snail’s pace was not enough to see even a fraction of the zoo’s 14,500 animals. We didn’t even see China’s national treasures: the giant pandas. Recovering from a ghastly cold, Dumpling also wasn’t feeling so hot. Sick kid, tons of people, hot dog smells everywhere, and the poor hippo left me with some not-so-fuzzy zoo feelings.

All wasn’t bad though. We enjoyed the flora and flauna adorning the walkways and the swan filled lake. The 15 RMB (2 USD) ticket price wasn’t too bad either. 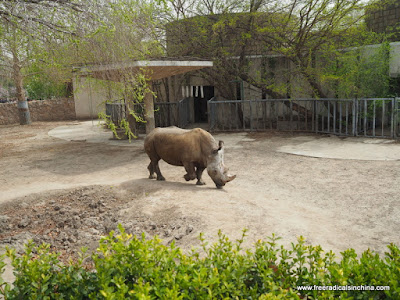 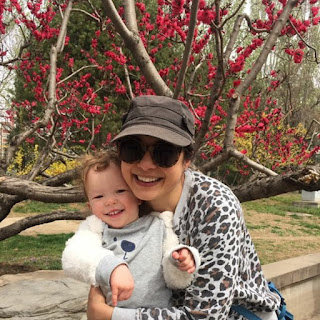