Down in the Valley 野营 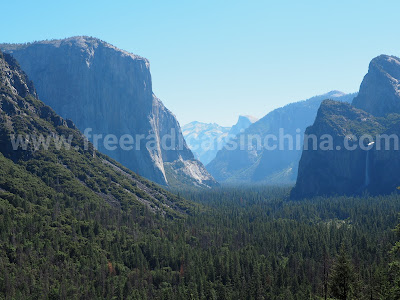 Just as we have done every summer for the last seven years, we--along with the rest of birdMAN’s immediate family-- packed our bags and loaded the cars to maximum capacity and headed out of town for a family holiday. Usually, we live it up in some MAGNIFICENT BEAUTIFUL house overlooking an astonishing alpine vista.

This year, we forewent the schmancy accommodations to “rough it” in wild Yosemite Valley. Instead of a jacuzzi, we had the near freezing Merced River in which to dip our toes. Instead of a gigantic refrigerator with an automatic ice maker, we had a legion of ice chests packed with craft brew beer and Costco sized packages of hot dogs, pre-made pork ribs and chili. Instead of king-sized beds with down comforters, we slept in sleeping bags faint with campfire smoke from previous camping trips. Instead of overlooking the vista, we were in the vista. Yes, it was MAGNIFICENT BEAUTIFUL.

We stayed in Yosemite’s Housekeeping Camp (YHC). The YHC unit is a three sided concrete structure with basic amenities: beds, a table, electrical outlets, a food locker to keep bears out, a picnic table, and fire pit. Guests bring everything else like bedding, towels, ice chests, and cooking equipment (for us, cooking equipment included a coffee maker and an Instant Pot). The YHC is like a combination of a basic hotel and camping.

Since the YHC is a budget friendly option for people who don’t really camp but don’t mind sharing bathrooms and showers with strangers, reservations for peak season typically fill up as soon as they are available. So one year plus one day in advance, Moomoo and birdMAN’s brother, Barach, stayed up to the wee hours of the morning until they successfully booked four units for our party of nine adults and seven kids.

Moomoo and Barach’s tenacity is not only thing to thank for such an awesome trip. Thanks to Sunny’s mastery of the persuasion arts, we moved from our original units that encircled the public bathroom to four units just a hop and skip to the river and its sandy banks. (Thank you Sunny for your dogged persistence.) In addition, Coco prepared adventure kits for each of the kids which included binoculars, sunglasses, and glow sticks.

These YHC units were ideal for us who just wanted to lounge in a camping chair with our kids in view. In between the units and the river’s banks was a sandy area where the kids stretched their legs, rolled around, and piled sand on top of each other. Relaxing, however, was nothing more than a pipe-dream flitting away like campfire smoke. Every five minutes, someone (uh-umm Dumpling) threw sand in somebody’s hair or somebody stole somebody’s toy. All these kids underfoot meant some adult was always asking, “Where’s my kid? Who has my kid? Wait...who hit who?”

While we certainly spent a lot of time at the campsite enjoying five minutes of peace at a time, we are an adventurous bunch determined get up close and personal with Yosemite’s awesome beauty. We all agreed to tackle one of Yosemite’s most popular hikes: from the valley to the top of Vernal Falls via the Mist Trail. Of course, we couldn’t leave the kids at the campsite to fend for themselves. So the five year-olds and younger got loaded on somebody’s back to be carried up the strenuous 1.2 miles of stairs and rocky terrain.

The two dads and three moms deserve a round of applause (and a cocktail or two) for toting their kids up that treacherous terrain. Coco gets extra praise for lugging five-year old Zea all the way to Nevada Falls. Having heard that returning via the John Muir trail would be less steep albeit a bit farther than descending straight from Vernal Falls, Kyle, Coco and their two mini mountaineers ended up climbing an extra 1,000 feet in elevation and a total distance of nearly 7 miles. Yes, Coco did that with a five year old on her back.

Overall, the family vacation to Yosemite Valley was more than a success. We ate good, laughed a lot, caught up on otherwise humdrum details of each other’s lives, and watched our kids bond and play. Importantly, no one got seriously injured or lost. 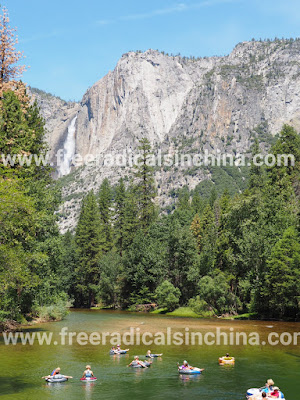 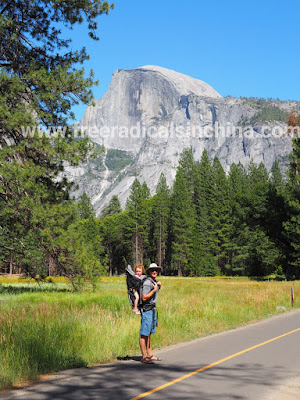 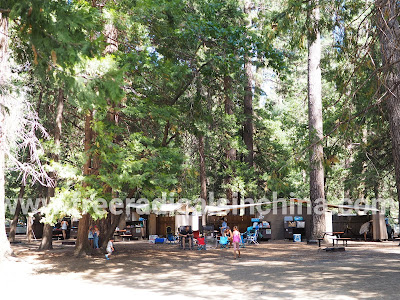