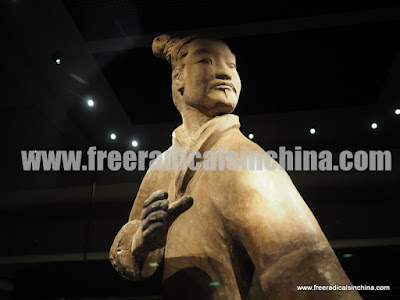 Young Emperor Qin thought a lot about death and the afterlife. Surely, the afterlife is much like the current life: fraught with dangers from marauding armies, deceptive palace officials, and evil spirits.

Thus began one of the largest projects in China’s ancient history: the construction of the Terracotta Warriors (兵马俑). An estimated 8,000 warriors and horses forged from clay and fire would accompany the Emperor into the Great Beyond. Each warrior, unique in appearance, would protect the deceased Emperor not only from up-to-no-good demons, but perhaps also from other terracotta warriors inhabiting some other dead emperor’s tomb.

Fast forward some 2,000 years to the year 1974. A lot of China history has happened and been buried under eons of rocks and soil. One day, local farmers digging a well penetrated through those eons and accidentally unearthed one of China’s greatest archaeological finds. The government swept in, the archaeologists weighed in, and the local farmers never got their well. The Terracotta Warrior Army was eventually hailed “The Eighth Wonder of the World.”

And that’s pretty much how my parents, Dumpling and me-- along with hordes of other tourists-- ended up in Xi’an.

Instead of kicking it in Beijing during my parents’ yearly visit, we decided to take a short trip somewhere, and that somewhere was Xi’an-- home of the famous Terracotta Warriors. Sadly, we left birdMAN behind to fend for himself for four days. That left me to play tour guide for my non-Chinese speaking parents. I am happy to say we got to our destination, we found our guesthouse, and despite a downpour and having a small child in tow, did quite a bit of sightseeing. No major setbacks or disasters (Whew! It’s China, after all, what could possibly go wrong?). As for Dumpling, even though her nap schedule was a mess, and keeping her sane involved a lot of bribing with goldfish crackers and Peppa Pig, she was a trooper!

The start was not so smooth sailing. After a somewhat stressful morning of catching a taxi, snailing through Beijing traffic, and scrambling around the train station trying to find the ticket pick-up counter, we boarded our Xi’an-bound fast train with a mere ten minutes to spare. As we congratulated ourselves on successfully boarding the train and recovered from the morning stress, we zipped 1,000 km in about five hours. That’s an average of 200 km/hour, or about 124 mi/hour. By comparison, driving a car from Beijing to Xi’an would take about 12 hours.

We stayed in a cozy guesthouse called Xi’an Simple Palace. Located near the south perimeter of the ancient city wall, it was a nice mix of old and new-- like IKEA set up house in a “Crouching Tiger Hidden Dragon” movie set. And when I say cozy, I mean cozy. Narrow corridors connected the courtyards and the rooms. A narrow, spiral staircase led up to the rooftop terrace, which offered a view of the ancient wall and its nearby fortresses.

Because we wanted an efficient tour with minimum hassle, we booked a private guide and driver via Viator, as recommended on CNN.com [2]. The price was steep at $113 a person, but the odor-free van with working seatbelts, an affable, English speaking guide, and no pressure to buy touristy junk made this tour worth every penny.

The museum is made up of three buildings that were constructed over the archaeological pits. Pit 1 is the most impressive, housing row after row of battle-ready warriors. To get that view, however, you have to fish through a sea of heaving bodies and cellphones to the ledge overlooking the warriors. You have about three seconds to take a selfie before getting shoved aside. Miraculously, Dumpling didn’t get swept away in the tourist tide. The other pits are busy too, but the shoving is kept to a minimum. Dumpling was especially enthralled with the horses and the headless soldiers.

After surviving the crowds and getting some one-on-one with the ancient warriors, Pop-Pop wondered if he could buy a souvenir. Yaya handed him a wad of cash and muttered something about having too much stuff in their house. The tour guide cheerfully accompanied him to the visitor center where high-quality warrior replicas could be purchased. Imagine Pop-Pop’s thrill upon seeing a local celebrity at the center. No, that celebrity was not Jackie Chan. It was one of the local farmers who accidently unearthed the warriors. The farmers enjoy celebrity status in Xi’an and can often be seen around signing books and taking pictures with tourists. So Pop-pop not only took home a warrior figurine and a signed copy of a book all about the Eighth Wonder of the World, he also got to take home the sweet memories of shaking hands with one of those famous farmers and getting a photo-op.


Besides the warriors, Xi’an has plenty of good eating. Culinary highlights included the best fried chicken ever at a restuarant I found on Dianping (China’s version of Yelp). I still dream about that fall-off-the-bone-fried-to-crispy-perfection chicken . We hit up Huimin Street (回民街) for some stinky tofu and barbecued squid kabob. And of course, good ole’ reliable Starbucks saved us from a torrential downpour while satisfying our caffeine needs.


In summary, Xi’an is a beautiful city seamlessly blending modern and ancient. The city center is encircled by the ancient city wall, a distance of 13.5 km which can be strolled or biked. Statues paying homage to Xi’an’s history dot the street corners and provide plenty of photo-ops. The people are exceedingly cheerful and drivers don’t seem as eager as Beijing drivers to run pedestrians over. Be warned, however, like many Chinese cities, Xi’an is not stroller or handicap friendly. Stairs are everywhere! It seemed for every half a kilometer of walking, we encountered a flight of stairs. Someone would grab Dumpling and someone would grab the stroller for a treacherous descent or ascent.

Also, many thanks to Yaya and Pop Pop! But next time, let's go somewhere with less stairs. Like Tahiti. 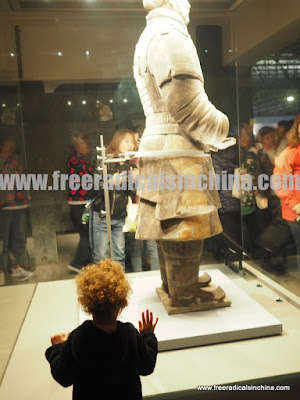 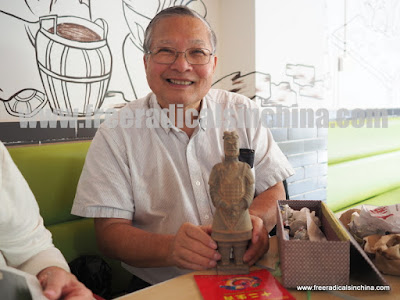 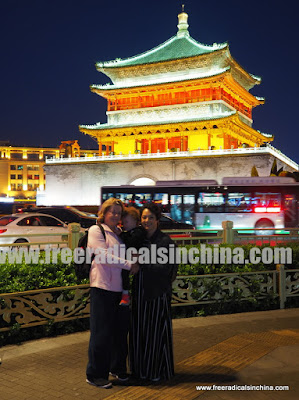 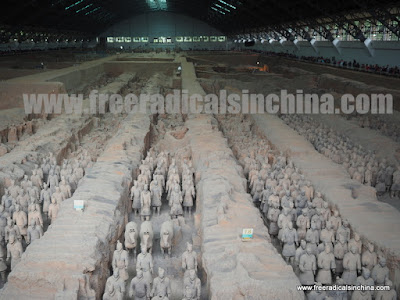