Wild thing, you make my heart sing
You make everything groovy, wild thing
Wild thing, I think I love you
--The Troggs 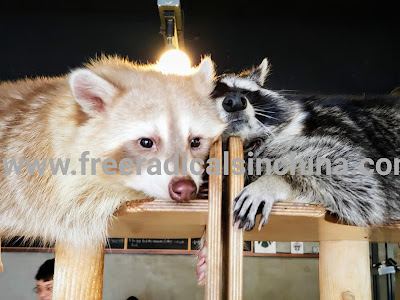 There's all kinds of crazy things to see and do in Seoul. You can sip a latte from a toilet shaped mug or chow on a doo-doo shaped chocolate scone at the Poop Cafe (yes, really). You can grow a mermaid tail or sit inside Van Gogh's Starry Night at the Trick Eye Museum. You can make like Sherlock Holmes and solve your way out of a locked room at the Escape Room Experience. Or you can eat freshly killed and still writhing octopus at the Noryangjin Fish Market.


These things all sound like a blast for me, but neither birdMAN nor Dumpling would agree. So while my crazy ideas got nixed, birdMAN and I  did agree on craft beer, cheeseburgers, and pizza during our Seoul weekend. But what about Dumpling? Isn't there a fun place for an active three year old in super hip, super fun, and super trendy Seoul?


The answer is yes, and that fun place involved coffee and raccoons.


North Americans may share my view: raccoons are just giant rats in cute, furry coats. As many campers have experienced, raccoons seem to have a personal vendetta against humans to spoil their camping trips. They break into ice chests and scatter hot cocoa powder everywhere, and viciously snarl when shooed away. Lock up the hens, lest a raccoon emerge from the storm drain thirsting blood. In the dead of the night, raccoons smite innocent chickens, leaving their owners (or in our case, a houseguest which happened to be my sister) to clean up the aftermath under the brutal summer sun.


So you see, raccoons don't get any love from me. But Dumpling, on the other hand, has never encountered a wild raccoon. She thinks they are as they appear: cute, furry animals. The Raccoon Cafe attracts coffee lovers that share Dumpling's view. I suppose the vast majority of Seoul dwellers have never encountered a wild raccoon (raccoons are native to North America) [1].


For 10,000 won ($8), patrons can fawn over, awe over, pet, and of course, take an ussie with a very plump and docile raccoon. Throw in an americano or latte for an extra 2,000 won. But there are rules. Latte drinking and raccoon cuddling may not be done at the same time. The cafe area is separated from the animal area by a glass wall and a gated door. Wild raccoons and coffee shop dwelling raccoons have this in common: they will attack for snacks.

Besides the raccoons, the cafe also has some meerkats and the tamest dogs I've ever encountered. An aggressive child could probably play tug-of-war with the dogs’ ears without even getting a (deserved) doggy nip.


For about two hours, Dumpling was over the moon with delight, the only kind of delight that a three year old can exude. She danced around in glee, alternating between petting the raccoons and playing catch with an exceptionally talented dog that caught balls midair. And I have to admit, even though the room smelled like a petting zoo and my clothes were covered in animal hair, the time spent at Raccoon Cafe was time well spent.


You might wonder, besides curious tourists scratching an itch for the outre, who else goes to the Raccoon Cafe? My guess is people who live in cities and have little exposure to wildlife. While raccoons living in a fourth floor coffee shop smack in the middle of a bustling city is far from natural, humans have a natural urge to be at one with the furry kind; and that urge may be satisfied even in the most absurd settings.


There are, however, some unanswered questions I have about the Raccoon Cafe. Do the dogs ever go outside?  Do the raccoons ever go outside? Where do these raccoons come from? Was that blonde raccoon bred to be blonde? Surely, a blonde raccoon couldn't survive in the wild. Are the raccoons happy? Is it ethical to house nocturnal animals in a coffee shop where they are bothered all day to take pictures and get petted?


I admit, my prejudice against raccoons was squished flat. Raccoons aren't all giant rats in cute, furry coats. Some of them are cuddly and cute. Just don't leave any hot cocoa around for them to steal. That just might unleash the wild within. 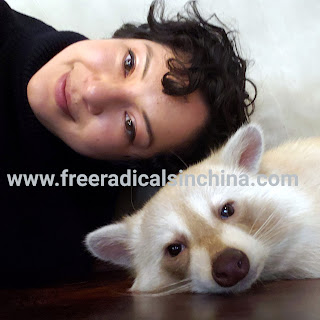 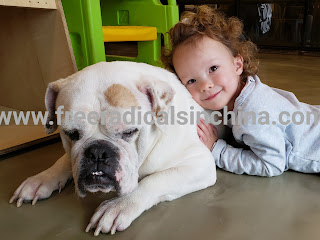 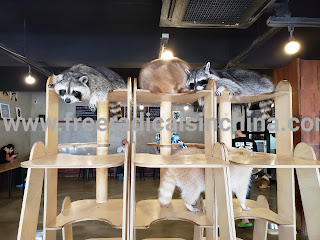 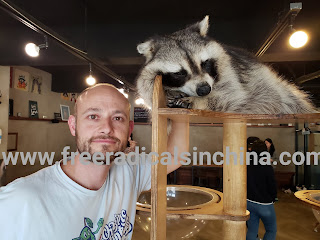 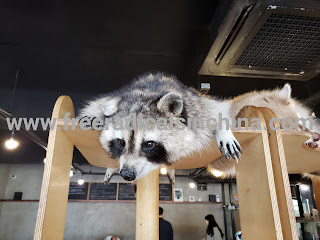