Inside the Safeway
It's like the Eastern Bloc
People have a way of getting crazy
When they think they'll be dead in a month
- Benjamin Gibbard
It’s 6:15 am. It’s early. Too early. I should close my eyes and join birdMAN and Dumpling in their blissful slumber. But then again, perhaps I woke up precisely on time.
Downstairs, atop of Moomoo’s quartzite countertop is a bowl of rising sourdough. Last night, I mixed together sourdough starter, flour, milk, sugar, butter, and an egg to form a dense round of dough. Throughout the night, the yeast from the sourdough starter converted the sugars to ethanol and carbon dioxide, and the bacteria converted the ethanol into lactic acids. As our house settled into stillness, the yeast toiled on in hungry earnestness.

After all, I've got all the time in the world with no end in sight. It’s a quarantine life for us.

As of March 19, the State of California enacted a shelter in place order. Basically, the State requires people to limit contact with others outside their household. Malls, parks, and schools are closed. Restaurants echo empty aside from a few kitchen staff preparing takeout orders. An exciting outing is a trip to the grocery store where shoppers don face masks and maintain a distance six feet from others. After all, asymptomatic carriers could be anyone. Wedding guests and funeral attendees, tied together virtually via Zoom, rejoice and mourn at home. Even though the State has allowed some businesses to open, life is far from normal. Everyone is beginning to forget what pre-pandemic life was like.
So...what about you?

Maybe you are embarking on long neglected house chores and contacting friends that you haven't talked to in years. You are reading some thick books and knitting anything imaginable from potholders to earmuffs. You have binge watched Seinfeld and watched all four hours of Lawrence of Arabia in one sitting. You can't buy instant yeast and you've got the time, so you have jumped on the sourdough baking bandwagon. You spend way too much time on Instagram watching what other people are doing under quarantine. Online workouts. Baking extravaganzas. Homemade pasta. Zoom meetings. Cupboard organization. Home renovation. Planting a vegetable garden. Installing a video camera to watch eggs hatch out of a nest that an industrious bird built in above your front door.
That reminds me, time to check Instagram. Anyone post anything during the last seven hours while I slept? Did the hatching birds hop out of their nest yet? Oh yes, I remember, it's time to wake up.

Time to roll that risen dough flat, layer on the brown sugar, cinnamon, and butter, roll it back up, and slice it to reveal a decadent spiral of dough and sweet. Let it rise and let it bake. That’s right, I am talking cinnamon rolls. Get up now, and we can eat by 9 am. 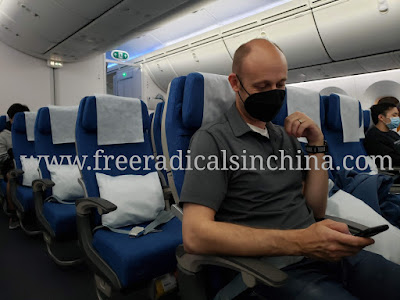 In another turn of events...we are back at Moomoo’s eating gourmet dinners and enjoying California sunshine. Yes, things are comfortable as comfortable does (under quarantine) in sunny California.


We decided to leave South Korea for these reasons:

After throwing around the idea of going back to California for a couple weeks and eating as much kimbap (Korean sushi rolls) as possible, we ultimately decided to say annyeonghi gyeseyo (안녕히 계세요) to South Korea. Instead of heading to the East, our home of eight years, we headed to the West, to the land of our birth [1].


Seriously though, waiting is a pretty sweet deal when Moomoo is cooking. I've almost--just almost--have forgotten about the kimbap.