Splish, splash, I was takin' a bath
Long about a Saturday night, yeah
A rub dub, just relaxin' in the tub
Thinkin' everythin' was alright
-Bobby Darin 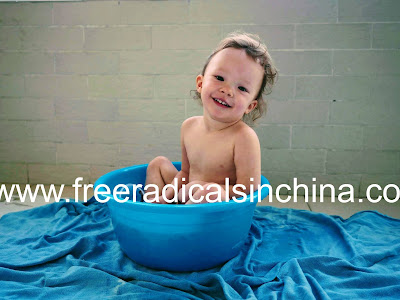 One afternoon during the summer of 2019, Dumpling was banging around in the bathroom, perhaps inspecting the drain or the shower. At 2.5 years old, Dumpling’s burgeoning curiosity drove her to explore the most uninteresting areas of our apartment. Suddenly Dumpling shrieked and ran out of the bathroom and into my arms. Tears spilled out of her eyes, her mouth contorted into a downward crescent. What happened? All she could sob was, “scary, scary.” The shower is scary? Yes, she confirmed. The shower is scary.

That shower. That weird shower. That decrepit shower that looks like it once belonged on the set of Buck Rogers.

In China, nabbing an apartment with a shower unit would seem like hitting the jackpot. Most bathrooms in China are “wet” bathrooms: the shower, toilet, and sink all occupy the same space. So you can imagine, as you shower everything in the bathroom also gets showered. Stray shower droplets dampen the toilet paper and towels, as well as any shedded clothes left on the floor. Using a shower-sprayed toilet conjures up all kinds of not so awesome feelings (especially if you are at somebody else’s house). Also, the shower water usually pools before it slowly drains leaving a soapy film on the floor. If you are fortunate, the bathroom floor slopes toward the drain. More likely, however, water pools in a low spot behind the toilet or sink exacerbating an inevitable mold problem. A “wet” bathroom is why plastic slippers are placed outside the bathroom for guests to slip on before entering the bathroom. How terrible if their socks got wet.

Our bathroom, however, was outfitted with a “luxurious” shower unit. A decade ago potential renters oohed and awed at this modern home amenity. In its prime, the shower stood proud as a space pod ready to launch. Press buttons with pictures of a telephone, radio, light, and other conveniences arrayed the interior wall. The curved plexi-glass doors confined the shower spray, leaving the toilet nice and dry. Maybe at one time the phone worked (you know, once upon a time when people had landlines). No need to interrupt your soap scrub to answer a pesky telemarketer. With the shower radio you could simultaneously rock out and steam up like Ferris Bueller singing “Danke Schoen” before he plays hooky from school.

But our shower never met those lofty aspirations. Nobody had bothered to plug in the shower so that the radio might play or that the telephone might be answered. The water feed line had sprung a leak, and water flowed underneath the unit and pooled on the floor sometimes flooding the base of the toilet. All that water gushing around underneath the shower surely left the floor tiles in a deplorable state. How many swimming pools could have been filled with the wasted water? Inside the shower, a calcified crust coated the unreachable crevices of the door track. Now rusted and the metallic coating wisping off like snowflakes, the shower nozzle, hose, and handle valve hung limp like broken branches. The shower head support was broken, on top of which we jimmied the shower nozzle downward so we could shower handsfree. Yes, this shower’s heyday--if there had ever been one-- was long over.

Over time, the shower became one of those “things” that aren’t ideal about China living but tolerable. We ignored the door’s janky squeak, the rusty hinges, and the flooded floor. We did what we always do when it comes to China life: focus on the positive. Hey, we had a shower, didn’t we? That is definitely something to be happy about. But we got even happier when that shower became where Dumpling took her nightly bath.

Bath time, ah bath time. Bath time was our reward for chasing around a toddler all day, successfully getting her to eat vegetables at dinner, and not going plain crazy. Bath time was also the prelude to bedtime, after which we could truly unwind and take deep breaths and focus on something for longer than five minutes without interruption. Not only does bath time mean peace out time for us, watching an elated toddler sudsing up and splashing around was an absolute delight.

That fateful day. That fateful day Dumpling came running out of the bathroom screeching, “Scary! Scary!” marked the end of an era. Any attempts to take Dumpling into the bathroom for a bath or potty training resulted in fountains of tears and sheer panic. Resigned, we moved the little training potty permanently into the living room. Every night, birdMAN lugged a water-filled IKEA plastic tub from the bathroom and placed it in the kitchen. With the shower out of view, the kitchen was a safe haven for Dumpling to bathe.

We hoped that sometime before Dumpling outgrew the little IKEA white tub she would conquer her fear of the “scary” shower. So we carried on. Potty training in the livingroom and bath time in the kitchen. That’s totally normal, right?

Some months later as the ginkgo trees were turning a glorious golden yellow, I had taken Dumpling over to a friend’s home for a playdate. The apartment had a "wet" bathroom, just like most homes in China. But just below the shower head was a newly installed bathtub. This bathtub was much smaller than a standard 5 feet long alcove bathtub that is found in most American bathrooms. This tub was more square than rectangular and deep. An adult could sit upright in it with his knees crunched up to his chest. Perfect for Chinese apartment living.

“淘宝“ (“On Taobao”), she replied. Right. Taobao, the online market where anything--absolutely anything may be purchased and expeditiously delivered to the front door.

At that moment, I realized we no longer had to put up with that “scary” shower. We could do a small-scale bathroom remodel ourselves. Aaaaand...we did not need to tell the landlord. As long as we made our rent, he really is 没关系！(没关系 means “it doesn’t matter“.) Certainly he wasn’t going to do anything about that leaky, broken down, and ugly shower. If we wanted to replace something that wasn’t completely broken, we would have to do it ourselves.

So here’s the rundown how we did our first ever bathroom remodel:

The total cost came to 2,540 RMB (370 USD). Yes, just a little pricey. But while we footed the bill for this house improvement project (and saving the landlord the hassle of dealing with the leaky shower), Dumpling’s bath time glee was totally worth it. She was THRILLED with her new spacious tub. As a MasterCard ad would succinctly put it: Shower. $370. Happy bathing baby. Priceless.

Two months after our bathroom “remodel”, we left for California with only two weeks worth of stuff. You know the story: a global pandemic that delayed our return to Beijing. Sadly, our Beijing apartment--along with the newly installed bathtub--sits idly awaiting our return.  Meanwhile, we are waiting out the pandemic at Moomoo’s (aka birdMAN’s mom) house. After six months of splashing around nearly every evening in a spacious tub scented with lavender bath gel, Dumpling rarely mentions the “scary” shower or her Beijing bathtub.

When (and if) we return to that long overdue new shower, hopefully Dumpling will find bath time as delightful as ever. And we once again will get peace out time as she splashes herself silly.